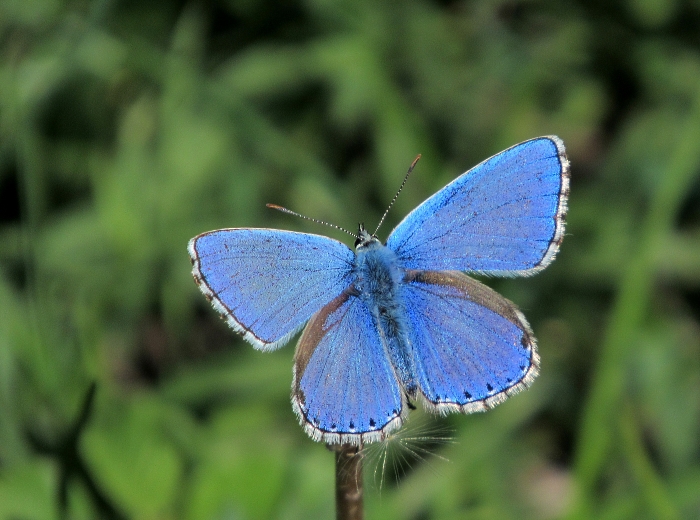 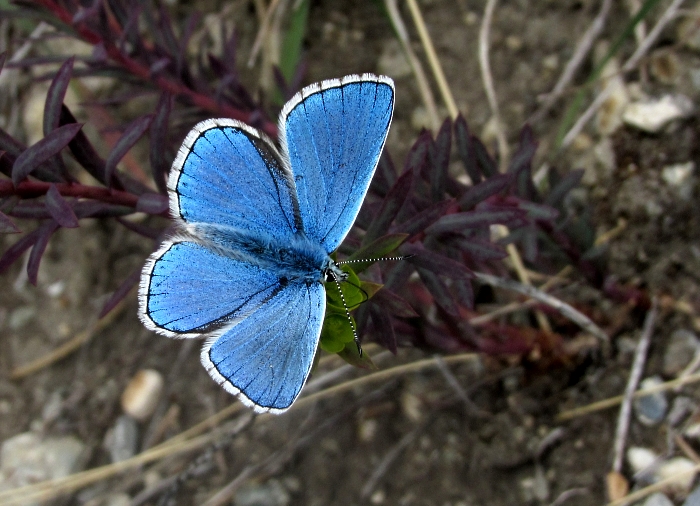 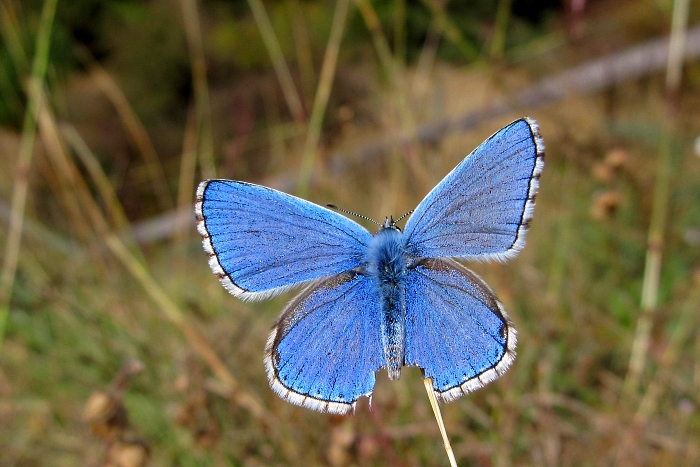 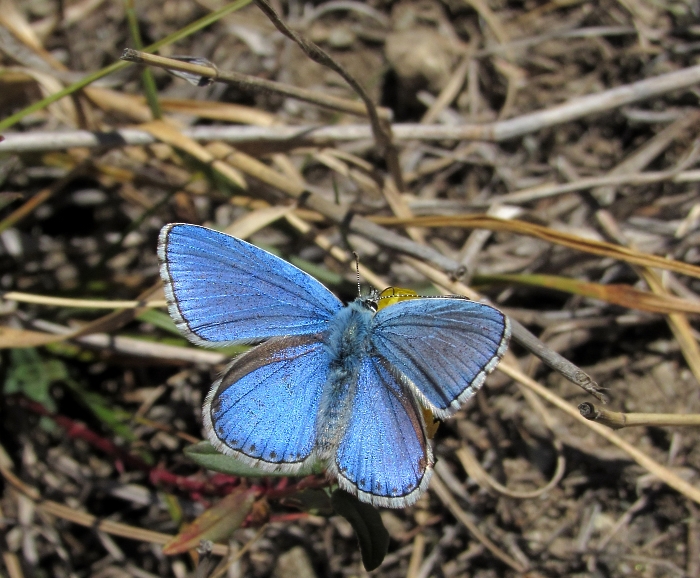 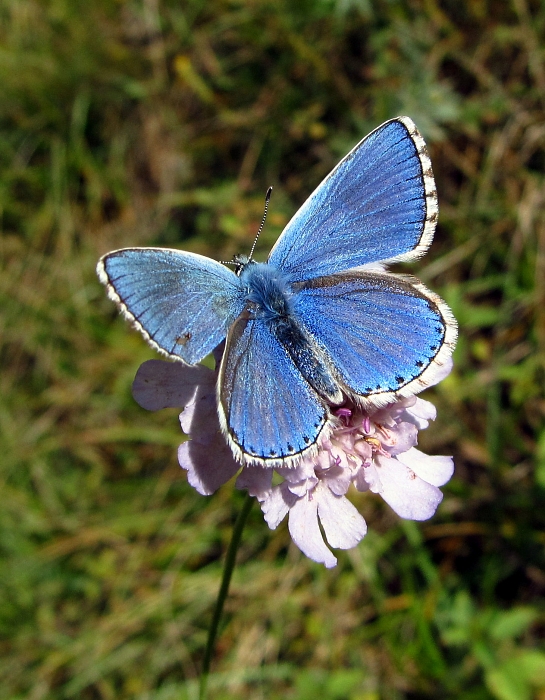 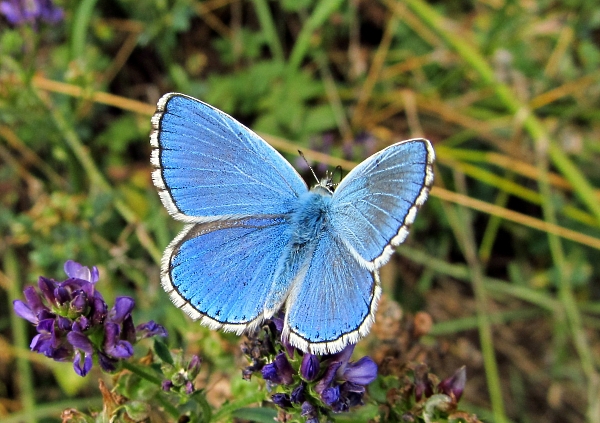 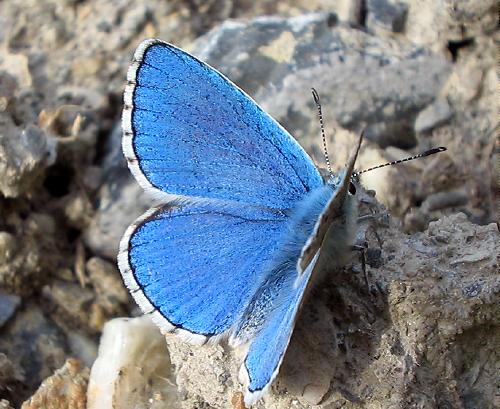 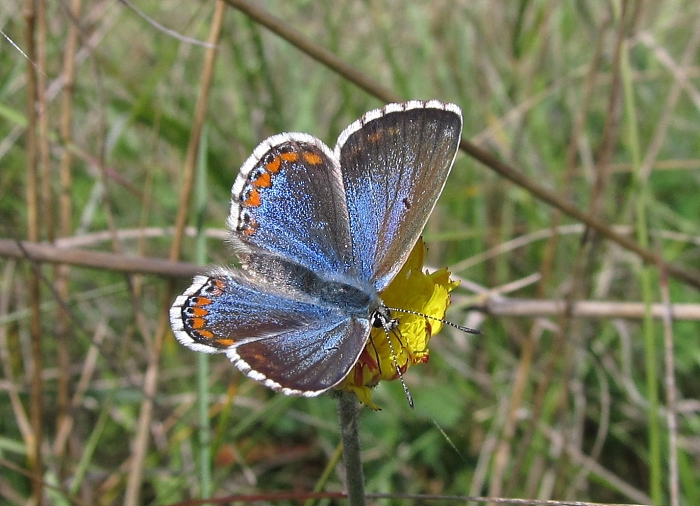 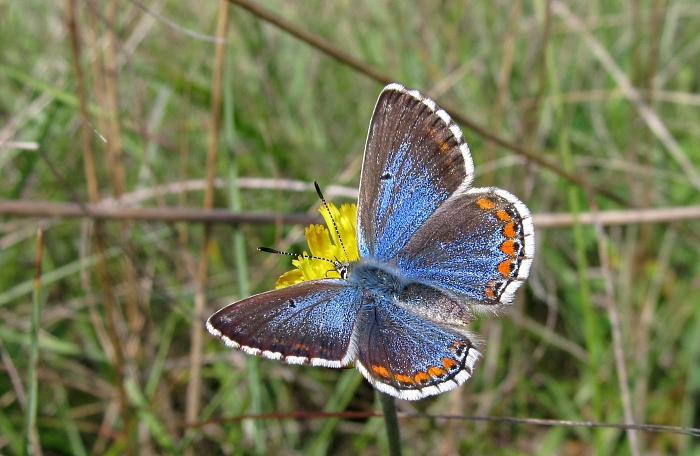 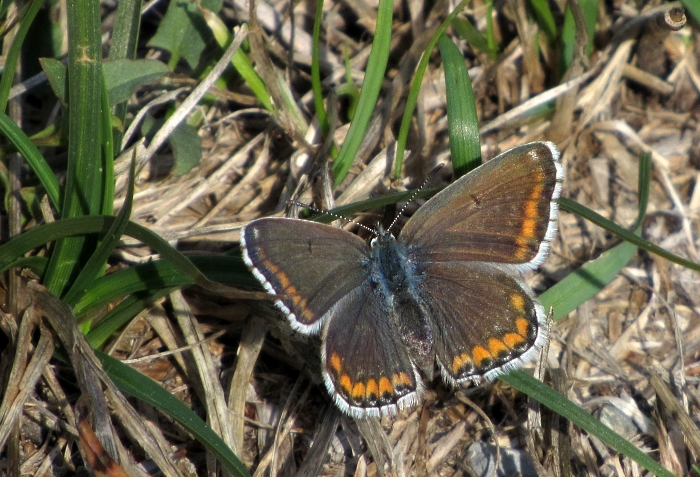 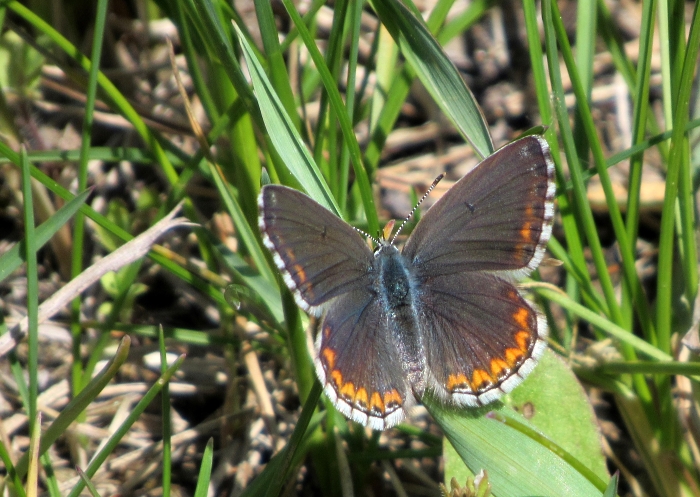 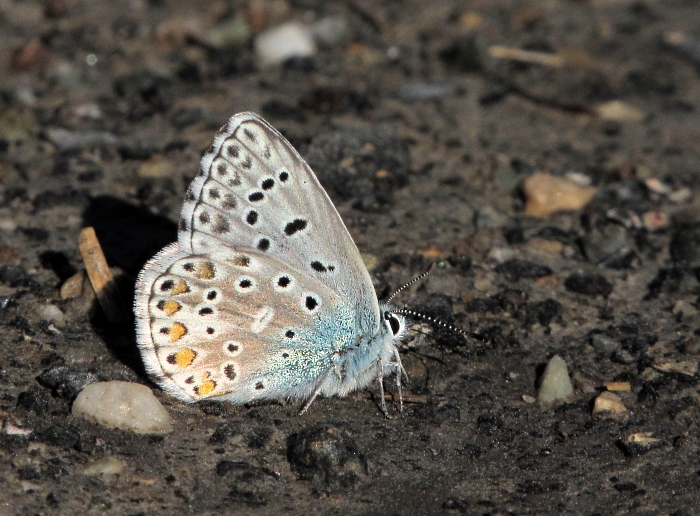 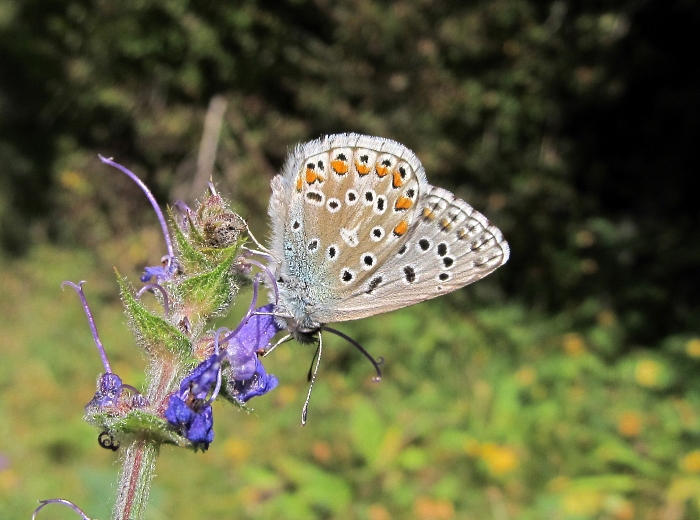 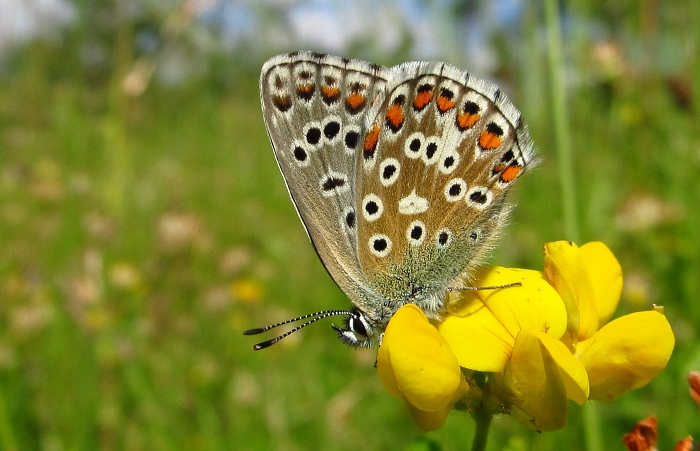 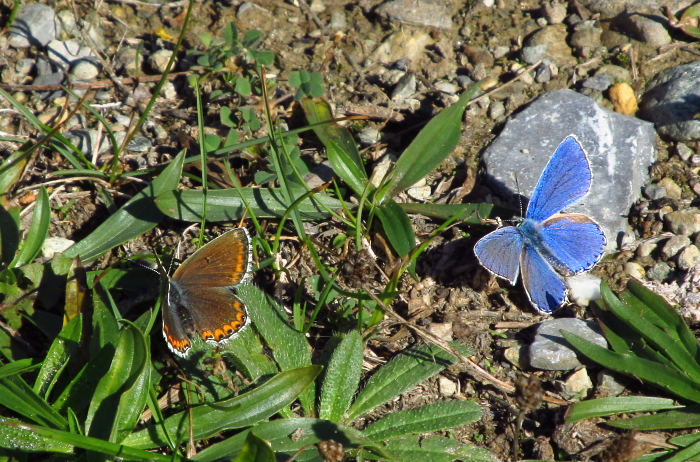 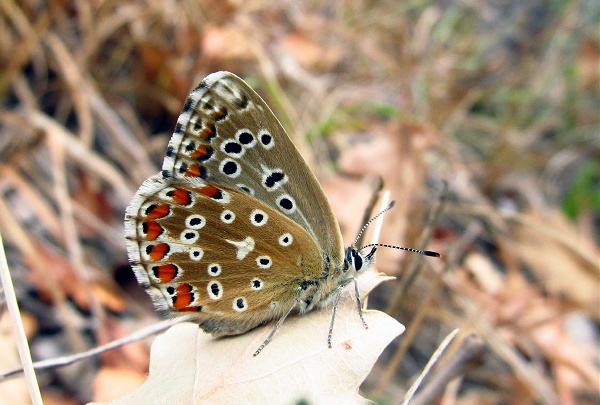 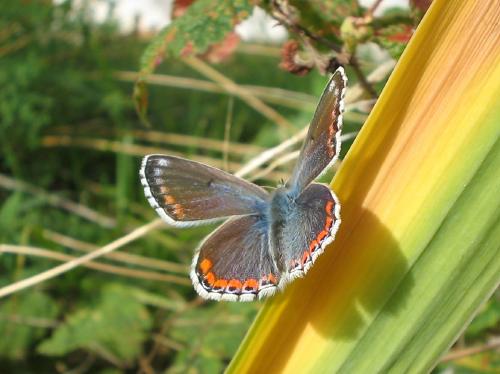 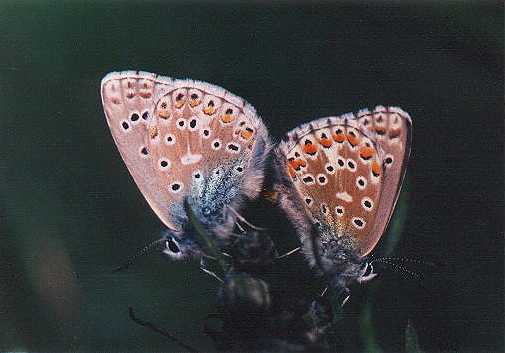 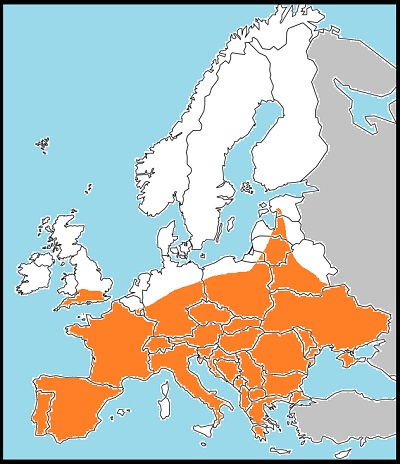 The Adonis blue is a familiar butterfly of chalkland over most of Europe, though absent from the North and rare in southern England.

Fresh males are unmistakable with their brilliant, deep and gleaming uppersides, enhanced by refractive tints that make them quite unlike their relatives. Even when worn they retain this structural brilliance from certain angles. The fringes are chequered right through to the outer half (common blues may appear slightly chequered but it is only on the inner half of the fringe) and there is a cell spot on the underside forewing. Some males show strong spotting around the outer margin of the hindwing upperside. This is completely absent in others. Females are brown above with varying amounts of blue at the base of the wings. Sometimes the blue may be very extensive and take on some of the refractive hints of the male. This is called form ceronus. Alternatively, it may be completely absent. The underside is similar to that of the male, though much browner. It can be tricky to tell brown female Adonis blues from female chalkhill blues. As a rule, female Adonis blues have a few blue scales in the white outer edge of the upperside hindwing lunules - outside the black spot. Female chalkhill blues lack these scales. These are not at all obvious, however, in worn individuals and their apparent absence cannot be taken as an indicator of chalkhill blue.

Adonis blues fly in two broods from April, in the south, through to October or November in favoured spots (like the Rhône Valley of Switzerland, for example). Females of the first brood cannot therefore be mistaken for females of chalkhill blue, which is single-brooded. The main foodplant is horseshoe vetch, though crown vetch is also used. The species hibernates as a caterpillar. Like most blues, Adonis blues have a close relationship with ants, gaining protection from them in the larval and pupal stages. This is part of the reason they are only found in warm places where the grass is kept relatively short and the ants can thrive.