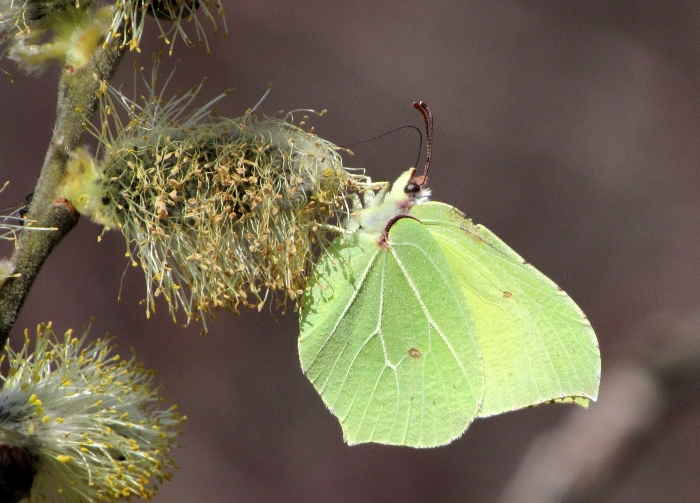 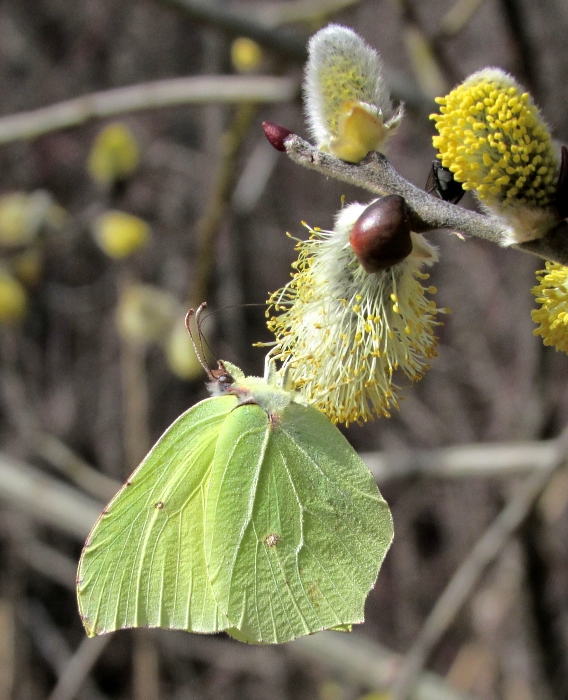 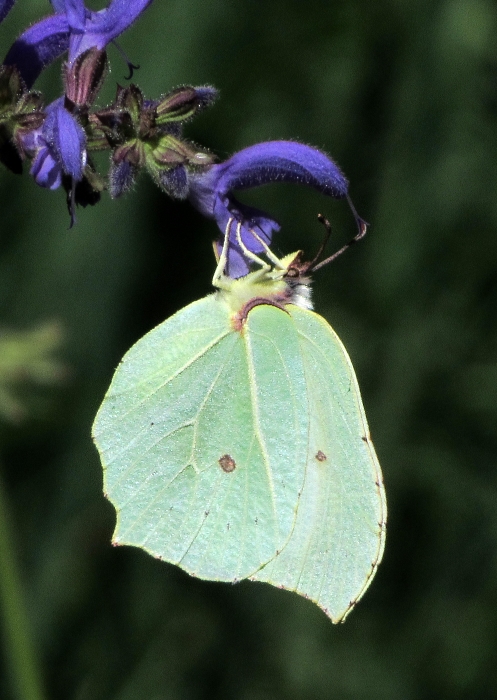 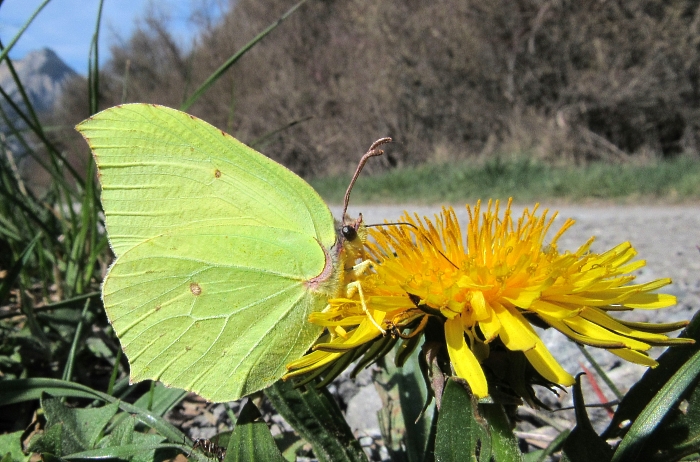 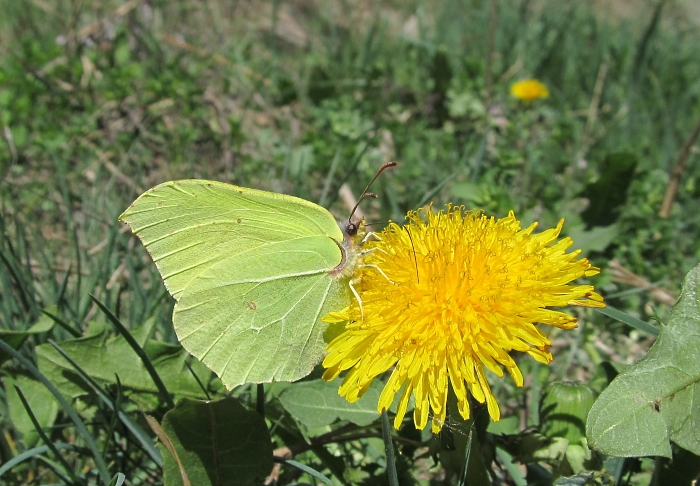 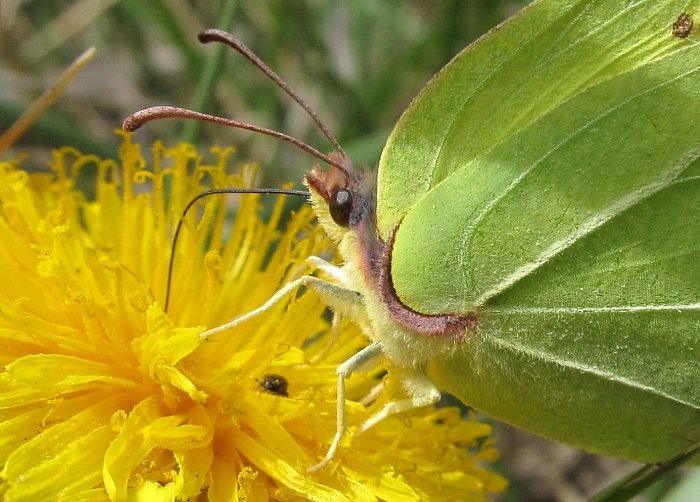 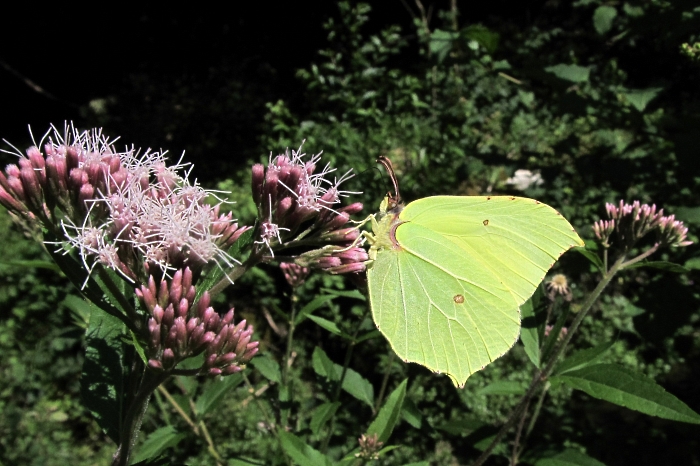 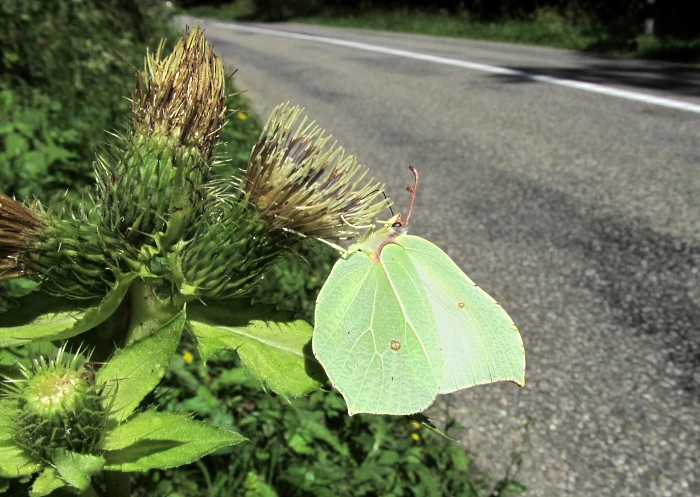 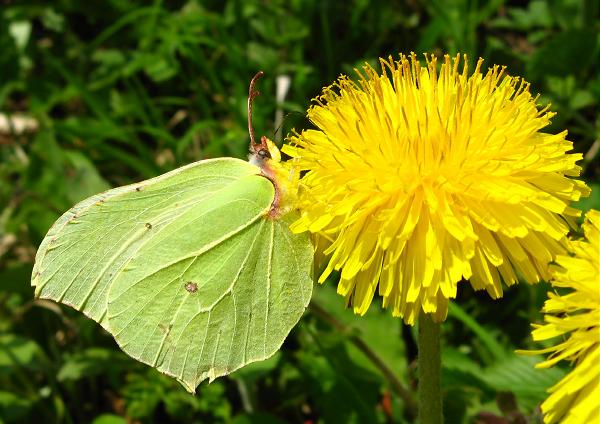 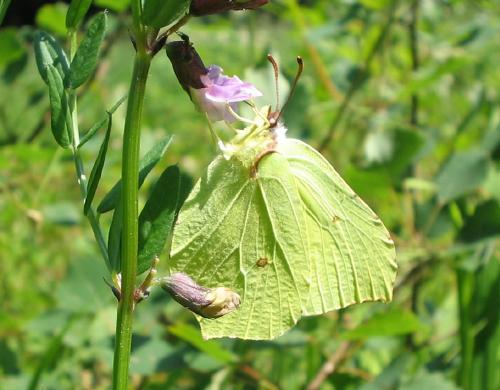 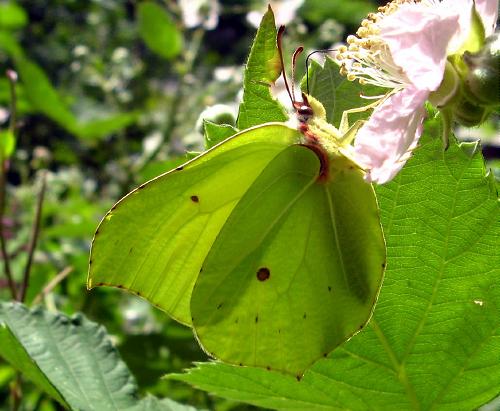 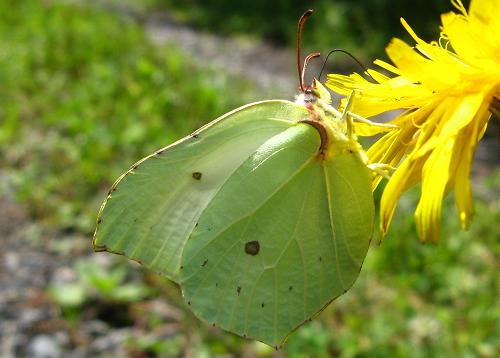 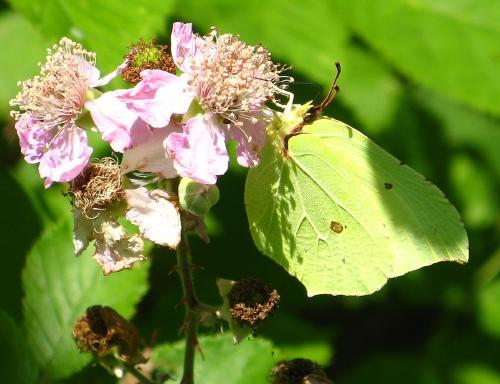 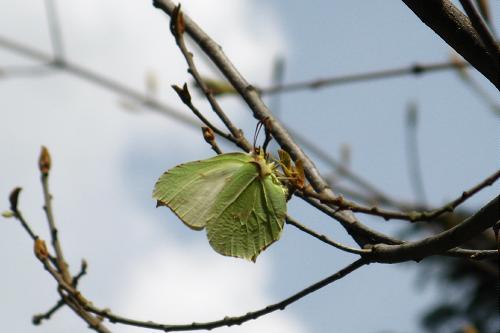 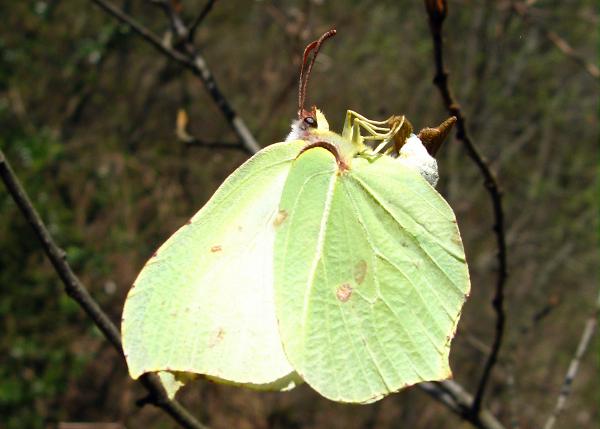 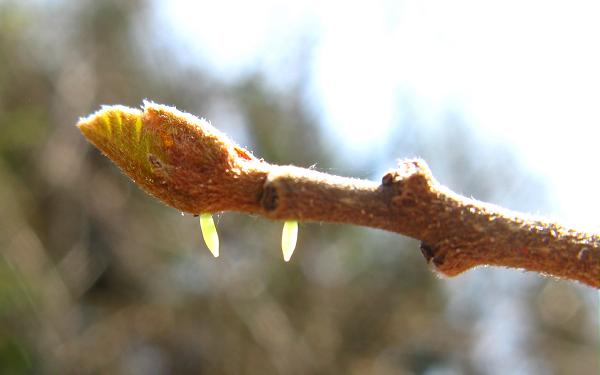 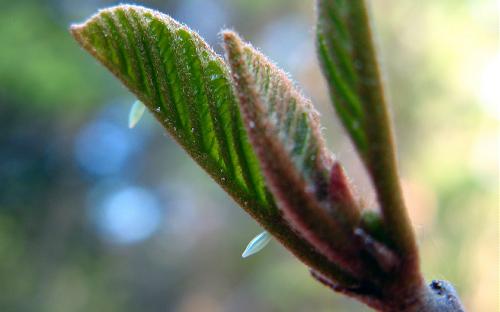 After a few days they turn greenish 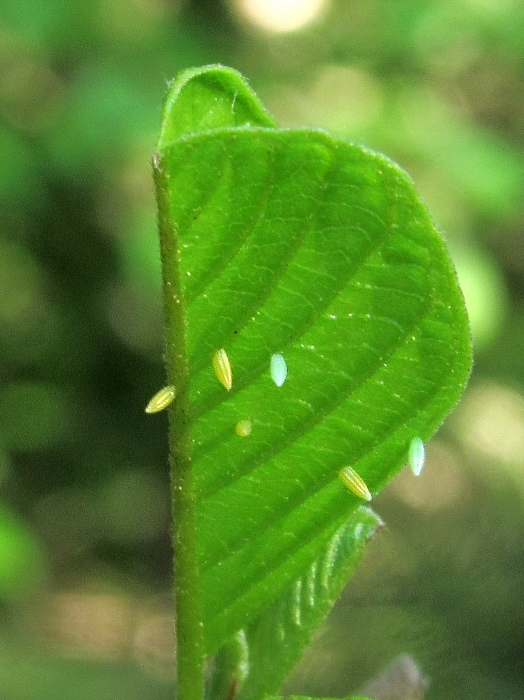 Eggs on alder buckthorn, Switzerland, May 2017 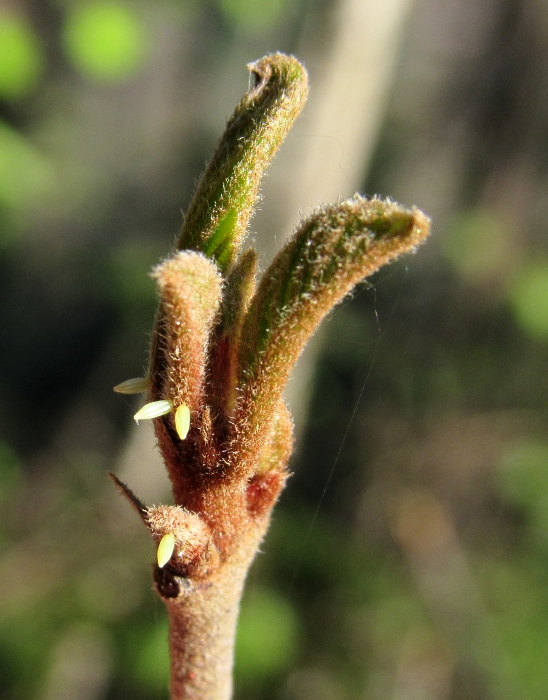 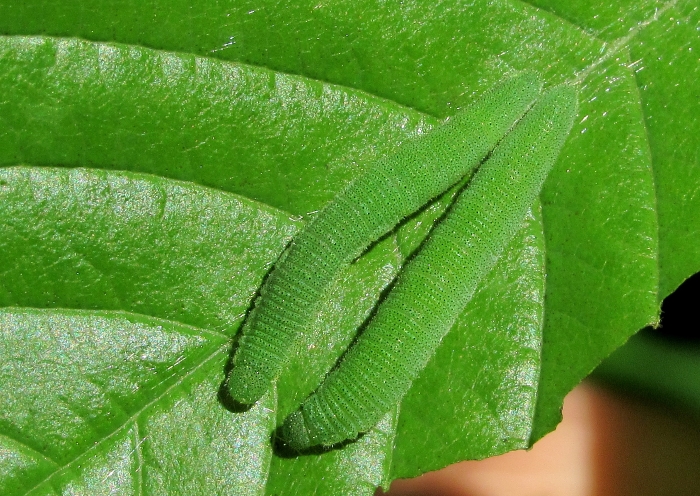 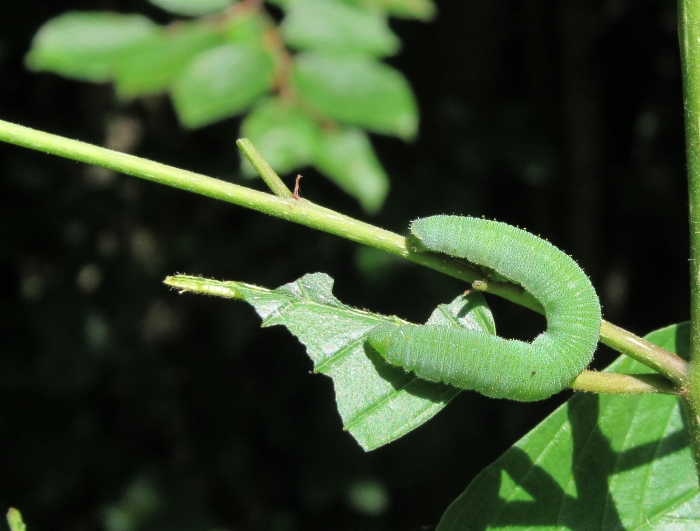 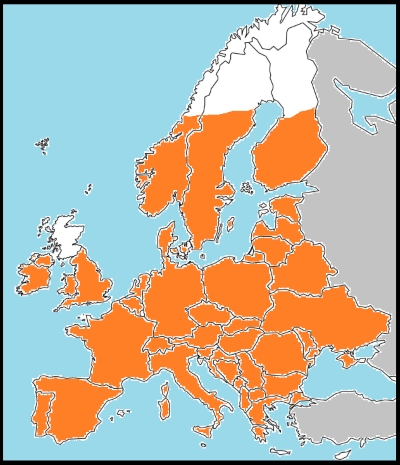 A bright yellow, male brimstone roding woodland edges is one of the most beautiful sights of spring. The butterflies hibernate as adults and usually emerge from their winter slumbers in March or early April, though some may be roused by exceptional weather in January or February. Females typically appear a little later than males, though it may just be that they are less conspicuous because they do not indulge in territorial flights.

In much of Europe there is no chance of mistaking this butterfly for anything else. The lemon yellow male, with no other markings visible in flight, is unmistakable. The white female might be taken for a white but she is bigger than most and on closer inspection shows no dark markings on the wings. The sexes share the leaf-like wingshape, very easy to see at rest. Unlike whites but like the clouded yellows, brimstones never rest with their wings open. In southern Europe, the similar Cleopatra flies. Males of this species sport an orange flush on the forewing, instantly differentiating them from brimstones, but females are harder. The female brimstone has a stronger point on the hindwing and not such a contrasting underside to the forewing. In parts of Greece, female Cleopatras are bright yellow, like male brimstones. However, the more rounded hindwing is a giveaway. In the Balkans a third species, the powdered brimstone (Gonepteryx farinosa), flies. This also has a shorter point on the hindwing. The forewings are said to be a slightly deeper shade of yellow than the hindwings (in the male) but I have never seen one and cannot say how obvious it is on a living butterfly.

Females lay their eggs on the still furled or open leaves of alder buckthorn, on which the fat, green caterpillars live. Adults emerge in June and July and feed up before hibernating. Summer individuals do not mate or indulge in any of the territorial roding but bide their time until the following spring, when the cycle begins all over again.