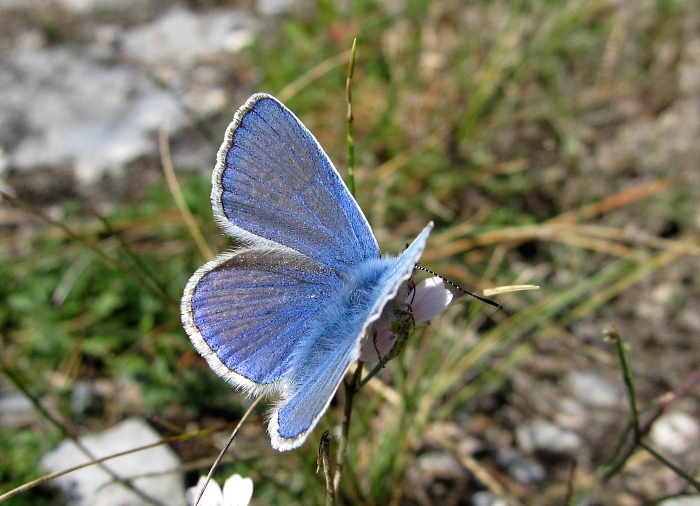 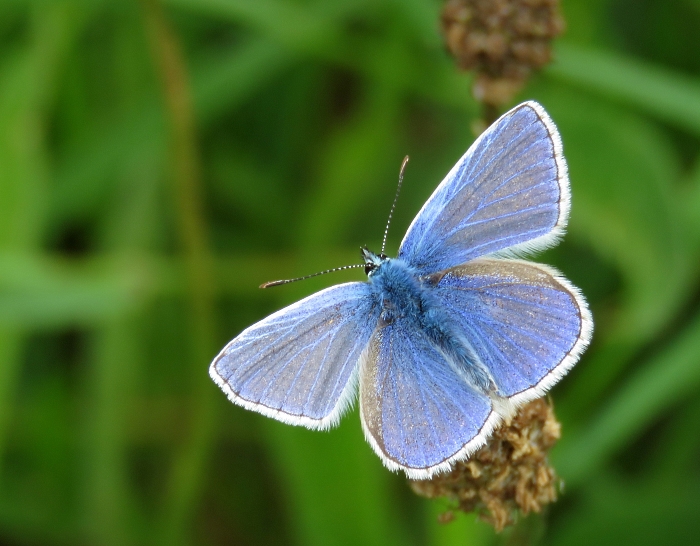 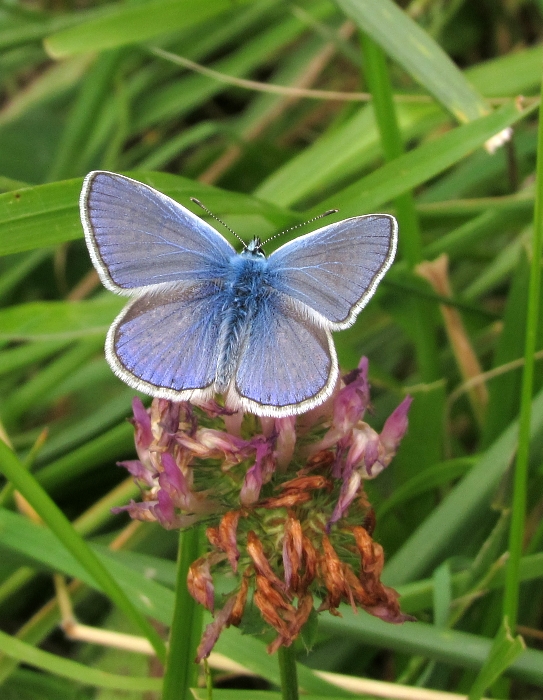 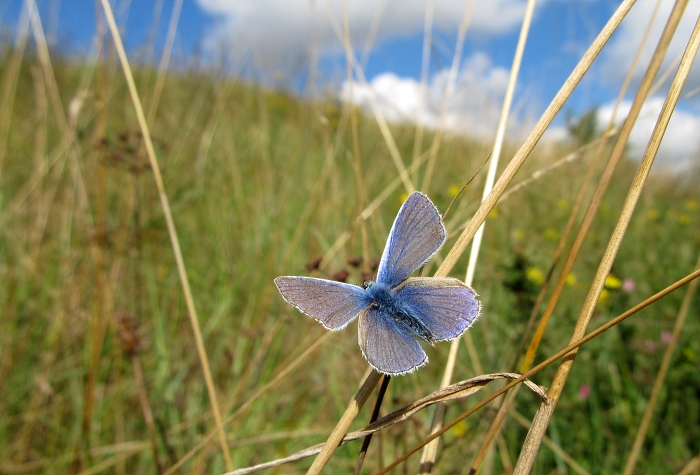 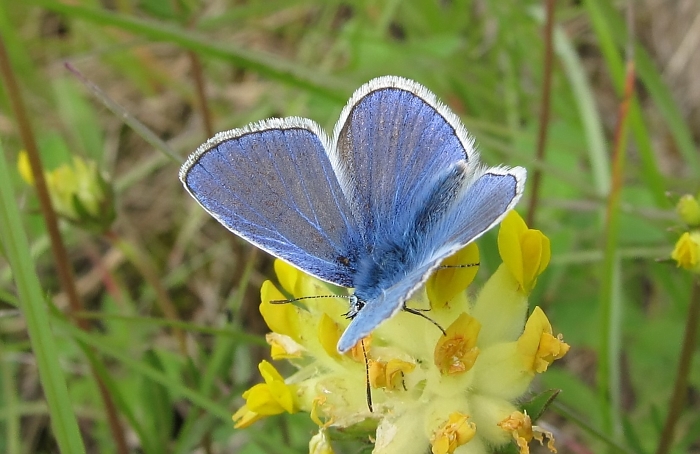 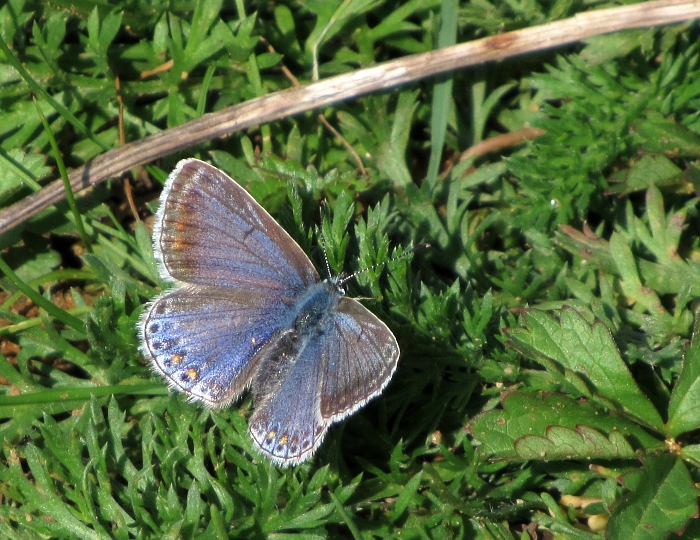 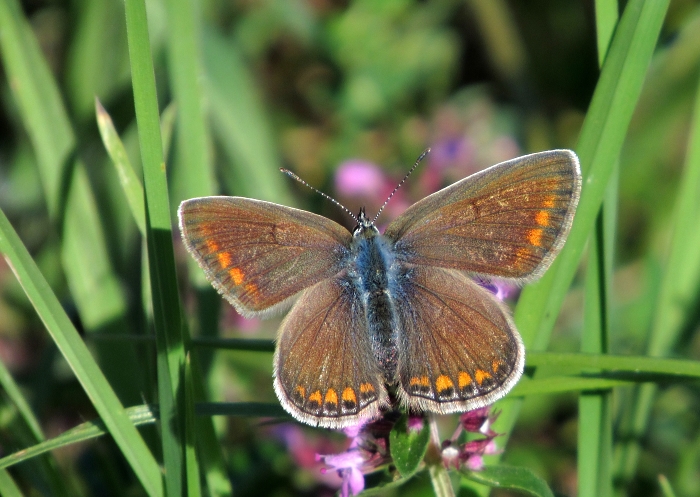 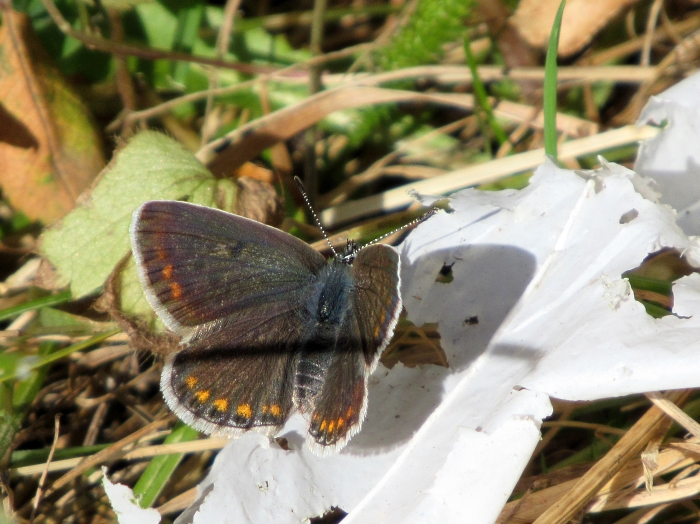 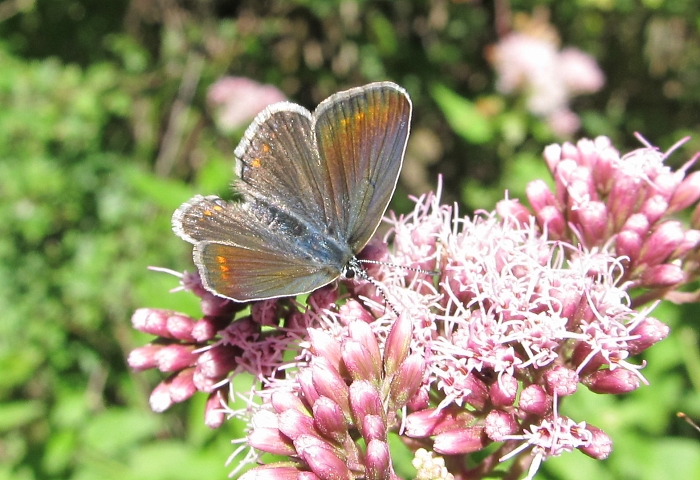 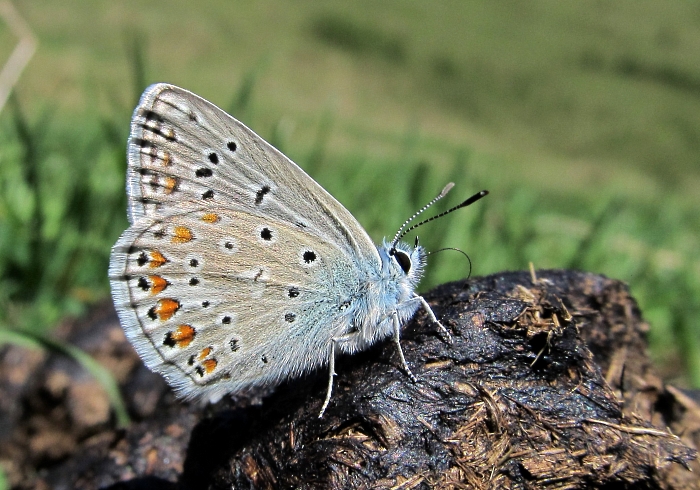 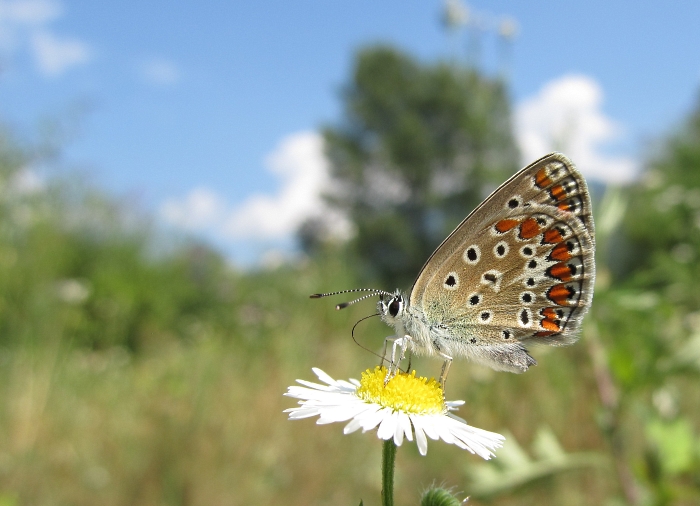 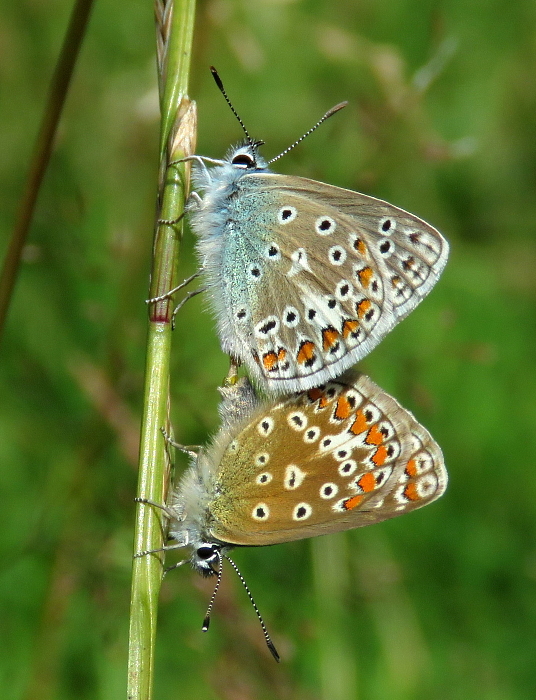 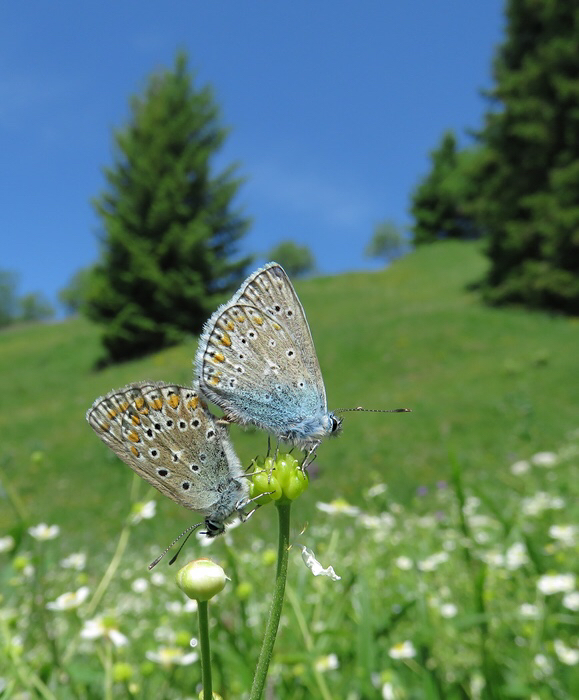 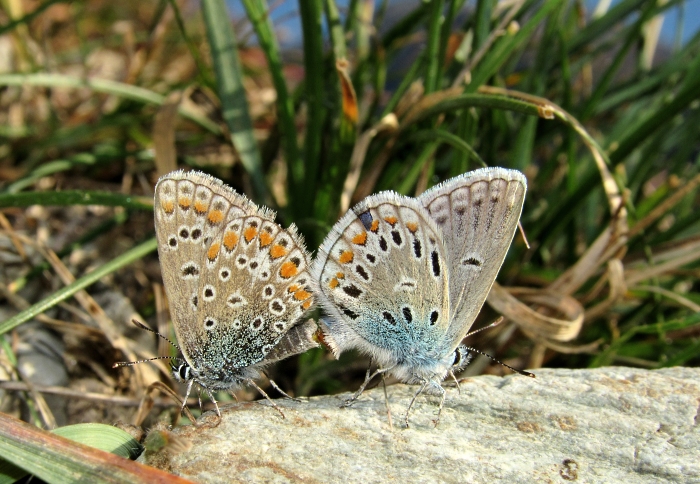 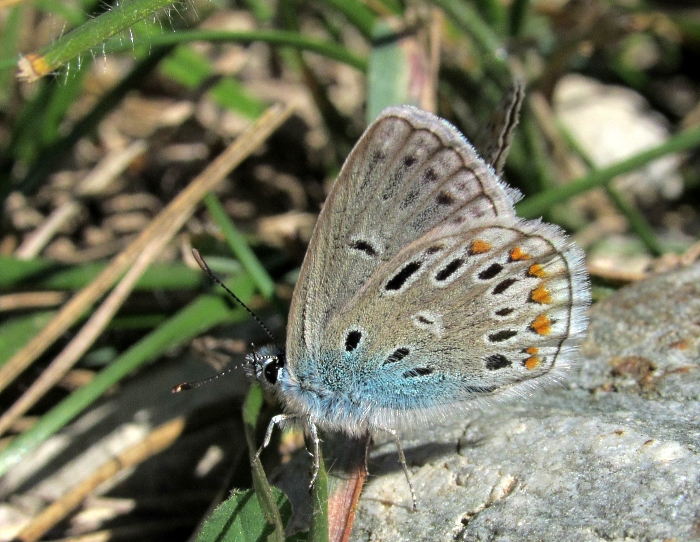 The other side of the same aberrant male 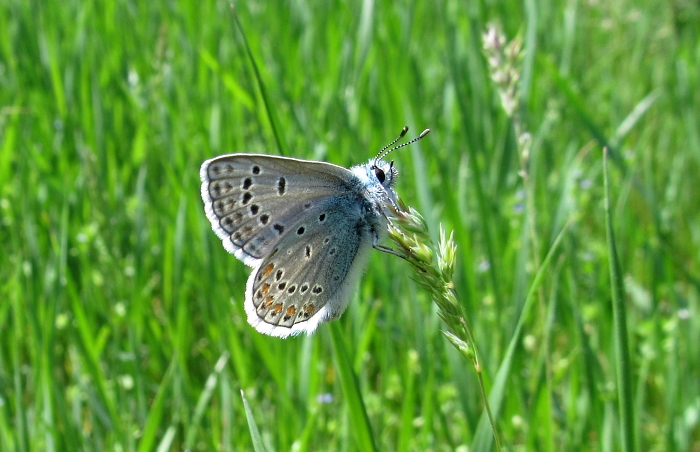 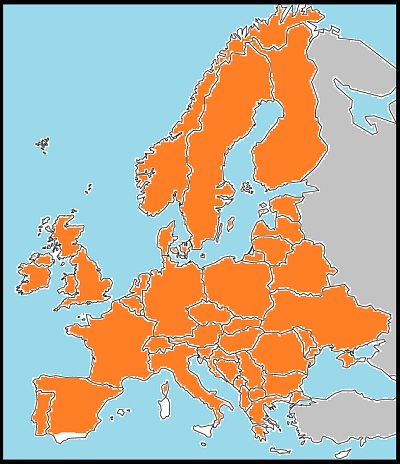 As its name suggests, this is the commonest and most widespread of the European blues, found almost everwhere in Europe from sea level to above the treeline. Its distribution in southern Spain is uncertain owing to historic confusion with Polyommatus celina, Austaut's blue. This latter butterfly is also considered by Leraut and others to be the resident species in Sardinia and Sicily.

The male is sky blue above, with a slight violet tinge, and narrowly linear, dark marginal borders. The leading edge of the forewing is always brightly highlighted. I have wondered if this is where the name icarus comes from - as if this gleaming edge represents the molten wax. There is no furry androconial patch, separating this species from the otherwise very similar Chapman's blue. The underside is essentially the model for all poylommatine blue undersides. Points to note are the presence of a cell spot in the forewing, except in the occasional form icarinus, when it is absent, and the slightly two-tone fringe - slightler darker on the inner half. If there is visible chequering on the fringes this extends only into the inner half (separating this species from Adonis blue, for example). The black spots outside the underside orange submarginal lunueles are frequently contiguous with these lunules, in places at least, rather than being discretely set in white (cf. Chapman's blue). The female is brown above with varying amounts of blue. The pictures show the the extent of this variation. She is similar to the male beneath but browner.

The common blue flies in two or three broods from May to late autumn, or one brood further north and at altitude. The caterpillars feed on a great variety of plants in the Fabaceae, commonly including birds foot trefoil and other clovers. It is the caterpillar that hibernates.