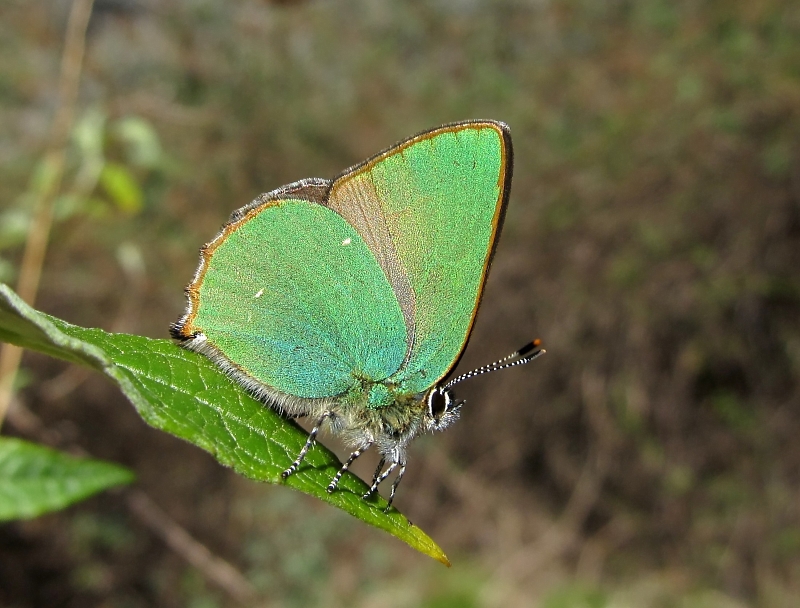 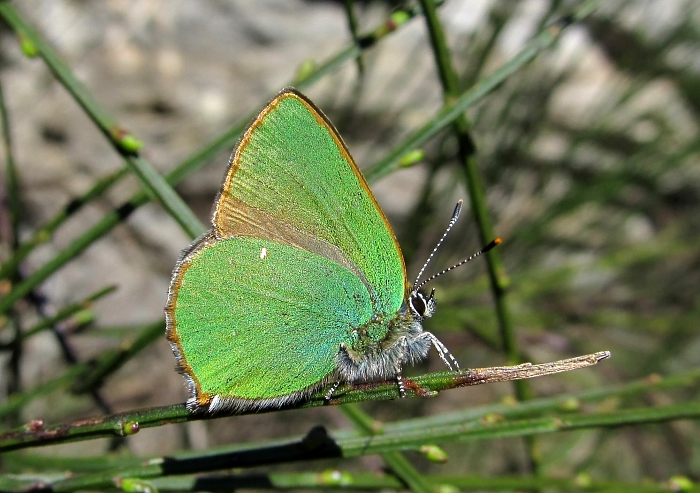 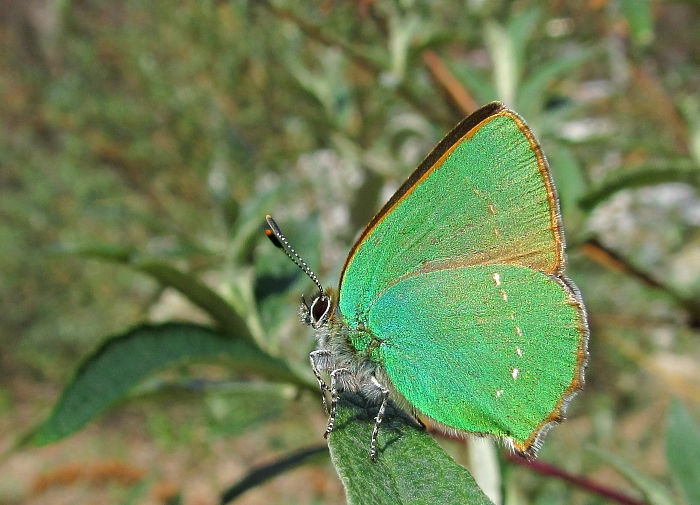 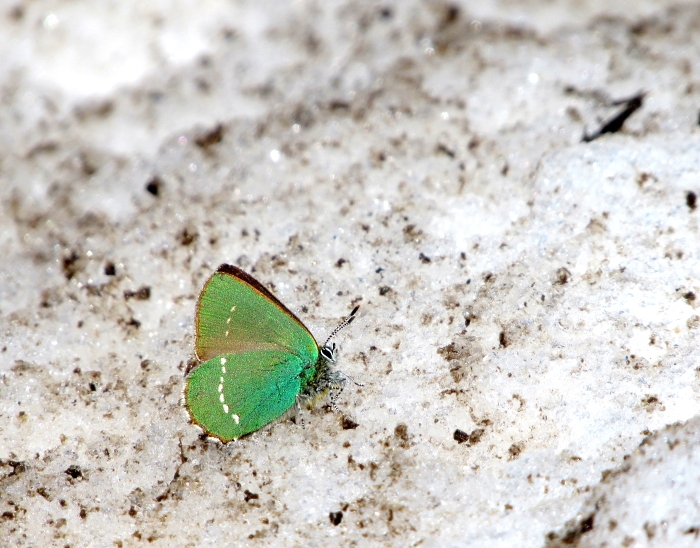 Individual on avalanche drift at 1800m, Switzerland, May 2018 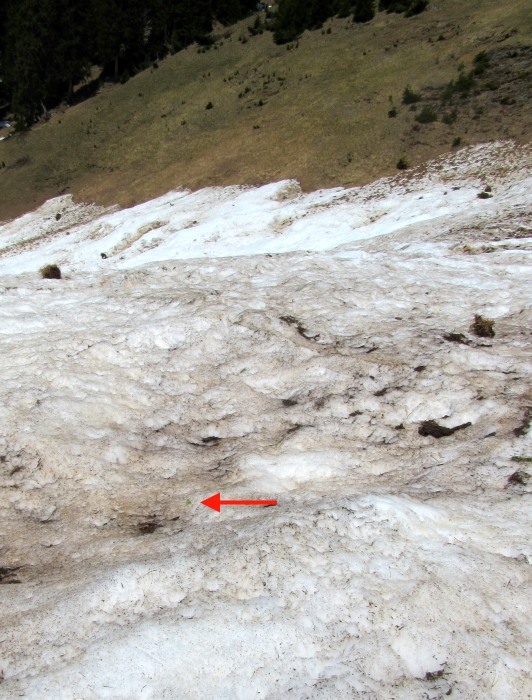 The context of the picture above. The butterfly was perfectly happy, choosing
preferentially to land on the snow. 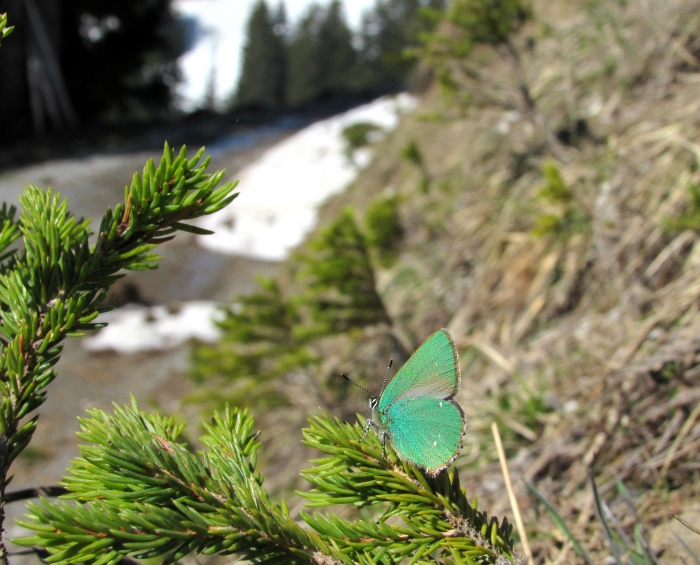 Another individual above the May snowline in Switzerland, showing much weaker markings.
Strength of markings is very variable and apparently not related to altitude, climate &c. 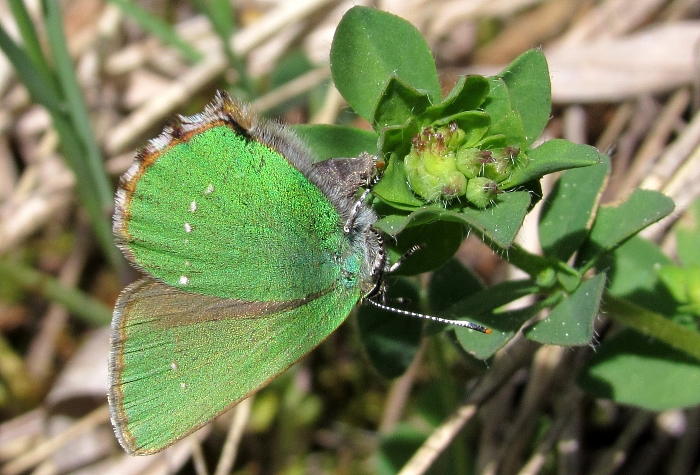 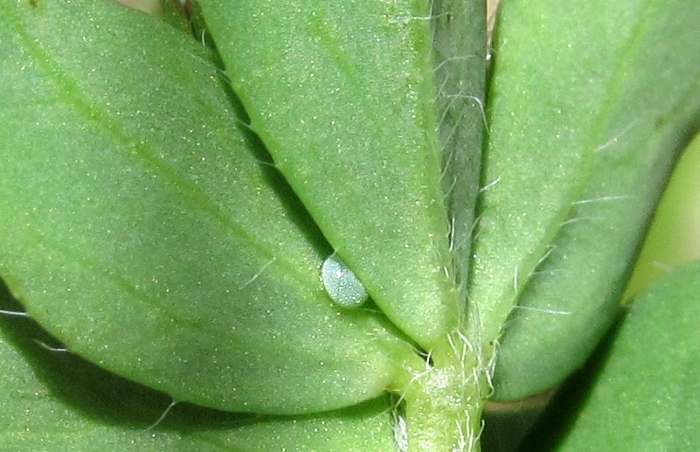 Egg on birds-foot trefoil, Switzerland, May 2015 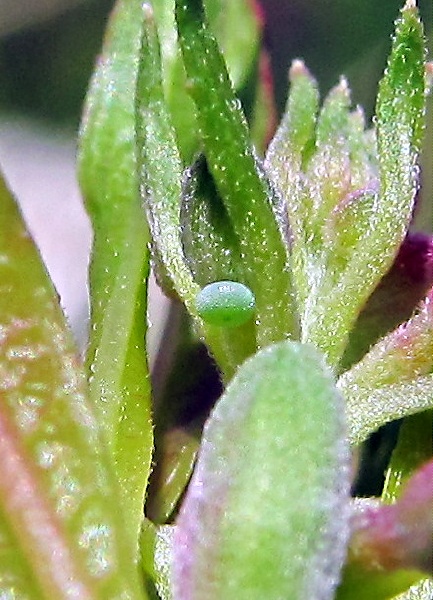 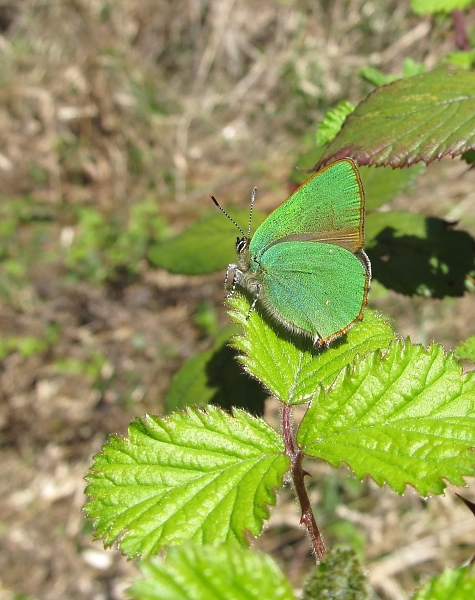 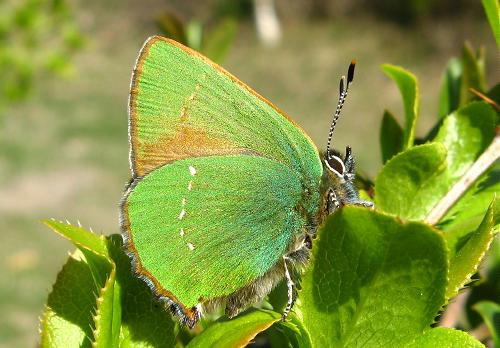 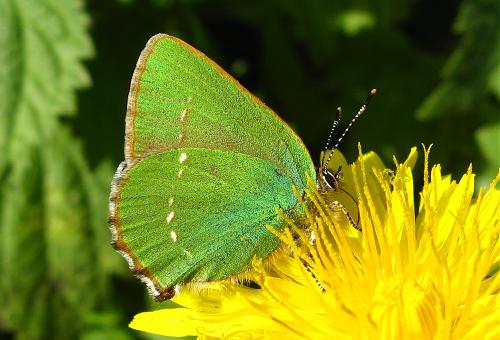 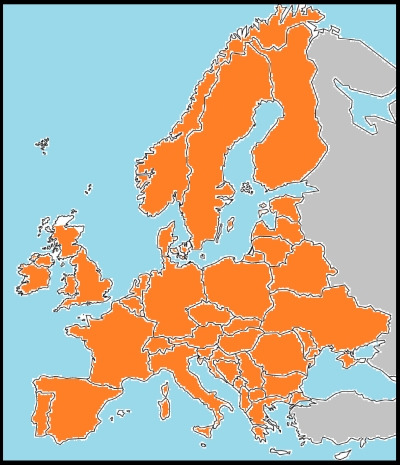 
In much of Europe, this is the commonest hairstreak, flying from March at low altitudes in the South through to July at higher altitudes and in the North. Males are pugnacious little creatures, vigorously defending their favoured branch of a bush or tree and darting out to challenge any passing insect. Females are more commonly seen as they go about the more lesiurely - but vitally important - business of laying eggs. Both sexes have a slightly tumbling flight, when they appear as generally dull, small butterflies but with occasional flashes of that brilliant green underside.

As these pictures show, there is great variation in the extent and solidity of the 'hairstreak' on the underside of this butterfly. Sometimes it is effectively absent, sometimes just a dash or two on the hindwing, sometimes it covers the width of the hindwing but not the forewing and sometimes it is prominent on both wings. Nevertheless, in most of its range this species is unmistakeable, being the only butterfly to have green undersides (which it invariably shows on resting, the uppersides never being visible). Only in parts of the Mediterranean region, where the very similar Chapman's green hairstreak flies, is confusion ever likely to arise. This latter butterfly is local and uncommon and I have yet to see one on my occasional spring forays to Spain. It is best separated from the green hairstreak by the eyes, which have a buff or rusty lining around them rather than the striking white-rimmed spectacles of the green hairstreak. Many of the pictures on Matt Rowlings's web page show this well.

Despite the name, this species is not particularly associated with bramble (Rubus) but will take a very great variety of different hostplants - including bramble. Pea species are often used, from small herbs like birds-foot trefoil to woody species like gorse and broom. The only real habitat requirement seems to be an availability of suitable bushes for the males to perch on and defend. There is a single generation each year. This means pupae formed in May or June must remain in this state until the following spring. Very occasionally, a few emerge out of season. I have seen one individual - the last picture above - in October, in a year when early snows followed by a thaw might have created a false impression of winter. I'd like to think it wasn't the only one that year and that it could have enjoyed some kind of social life, but as a rule there is no second generation even in exceptional years.