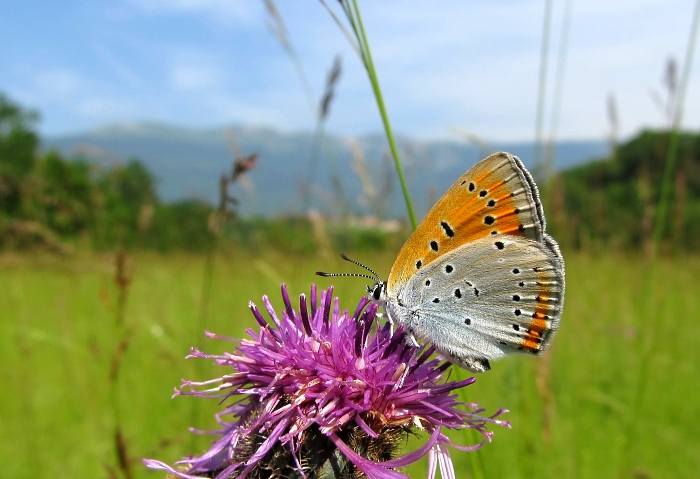 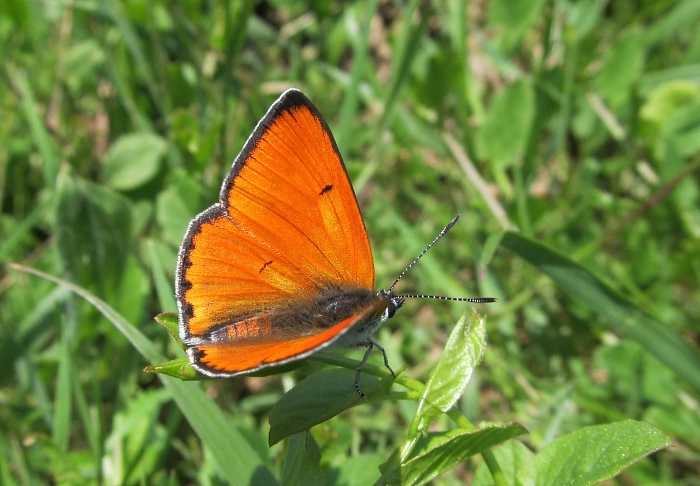 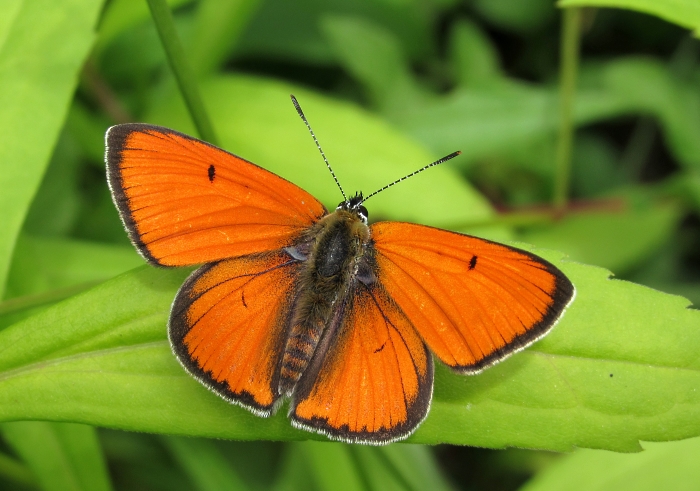 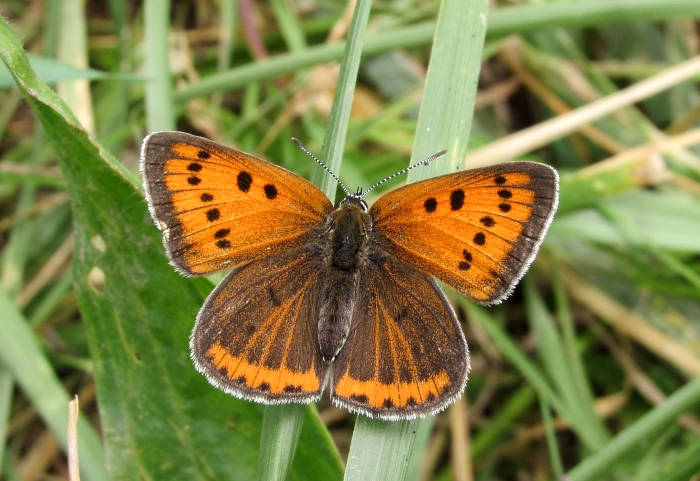 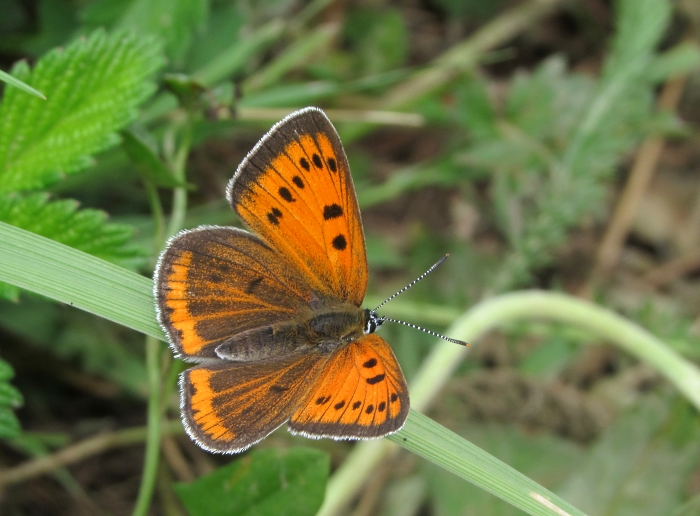 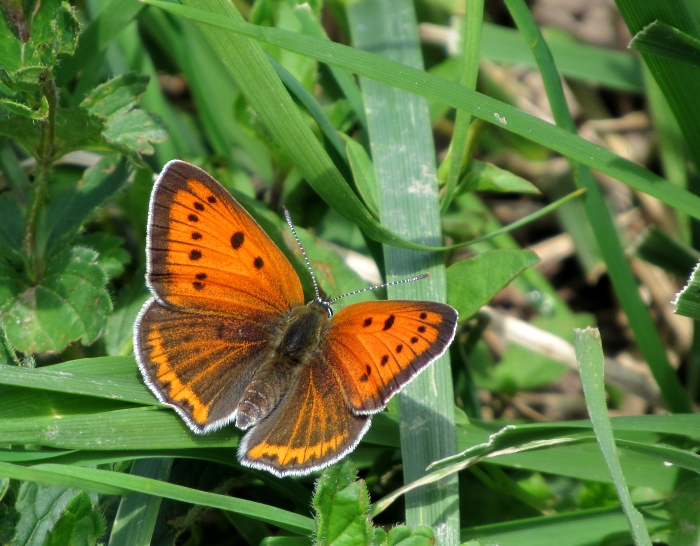 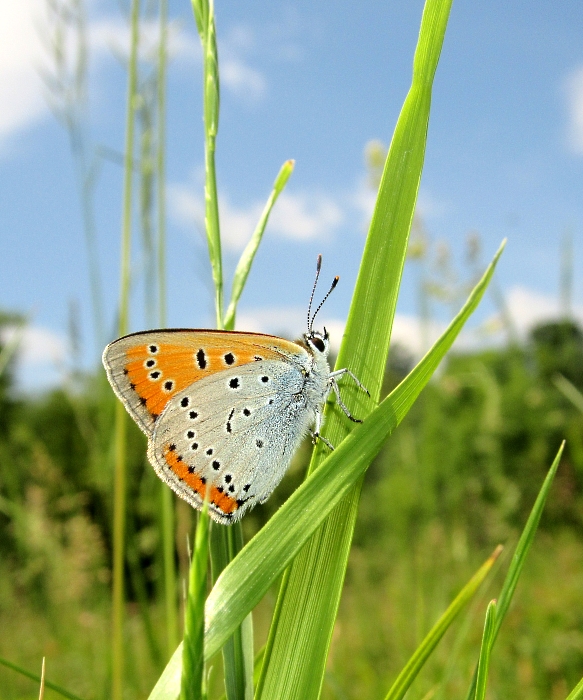 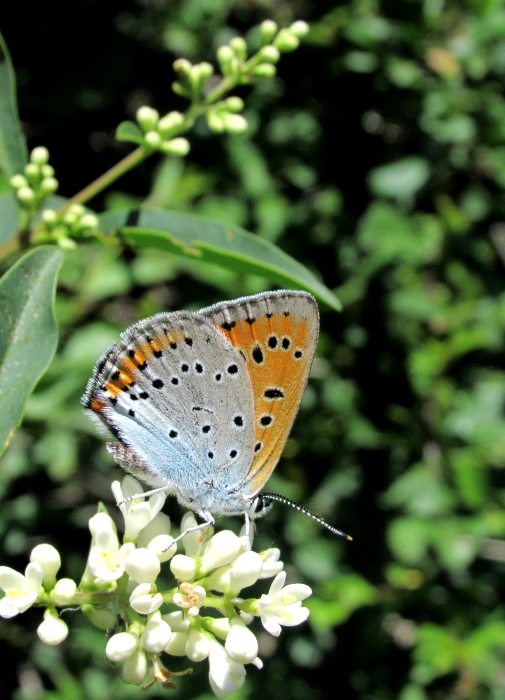 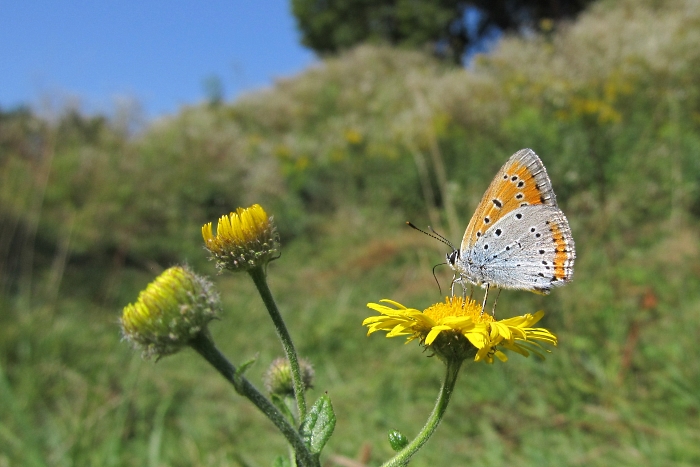 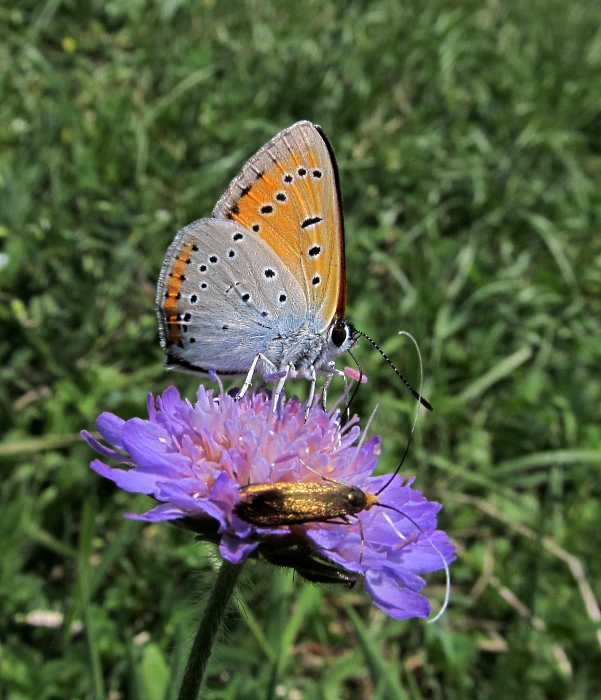 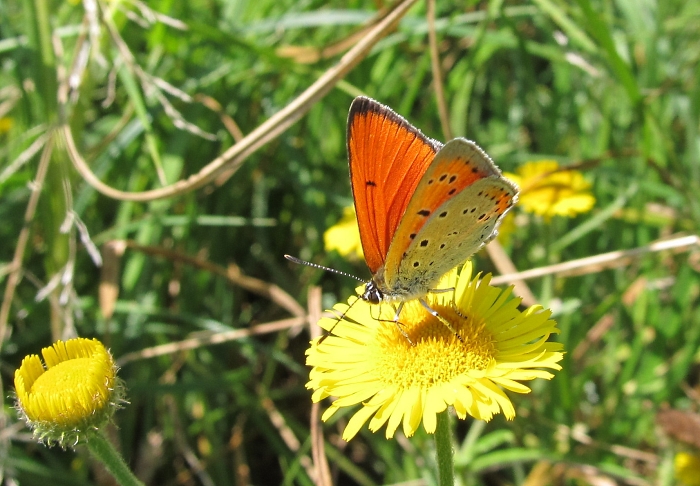 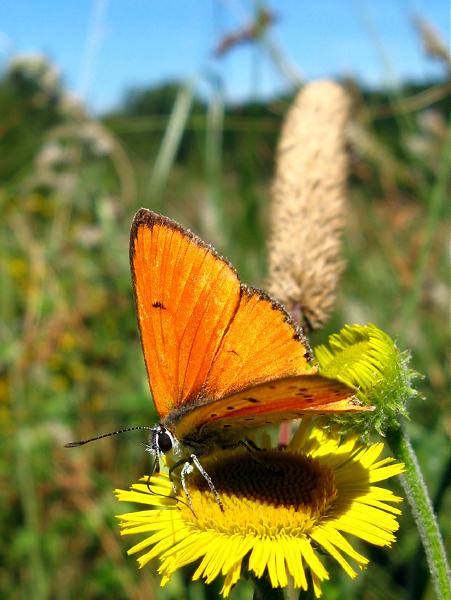 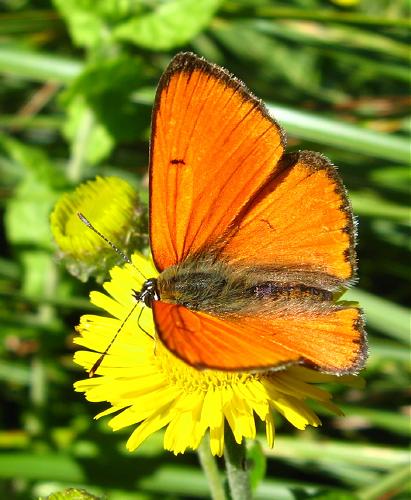 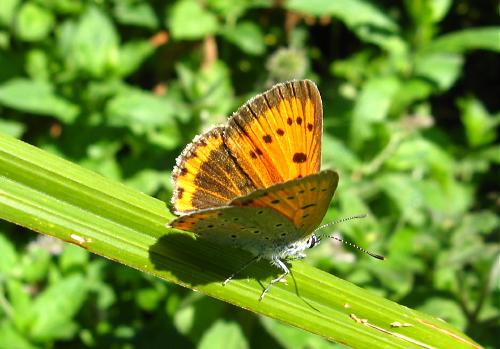 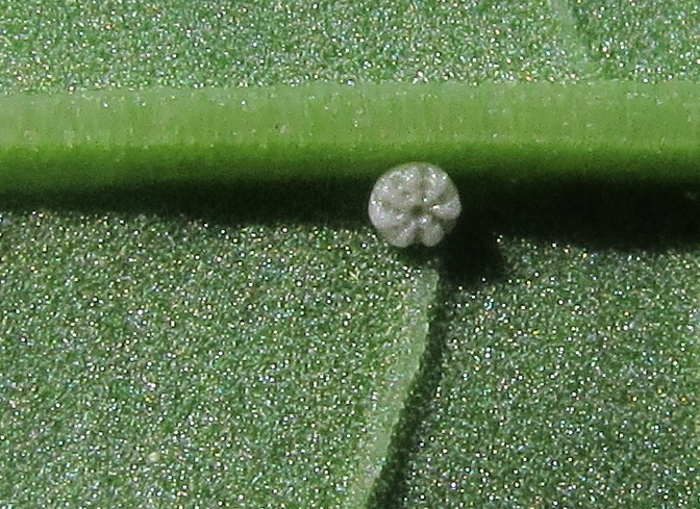 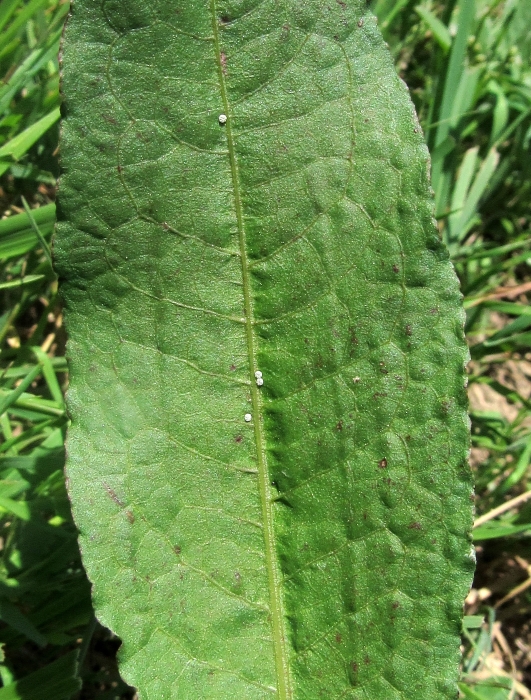 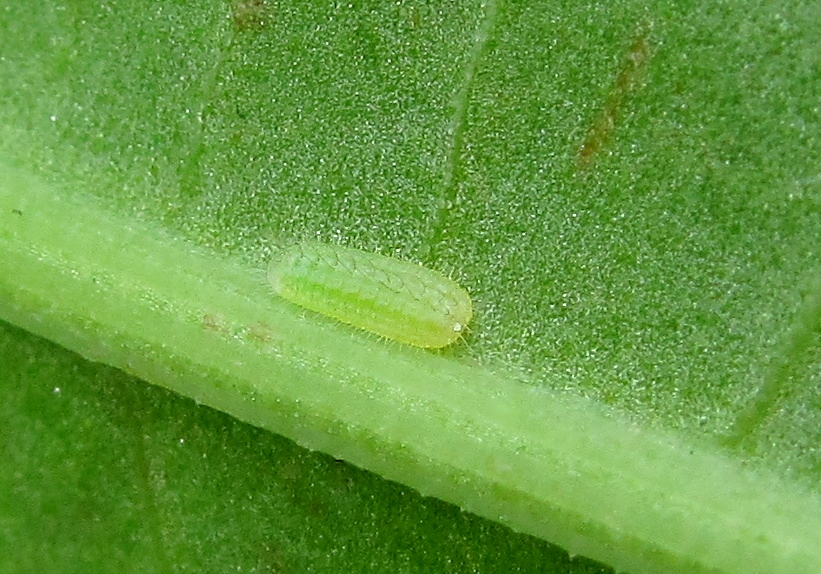 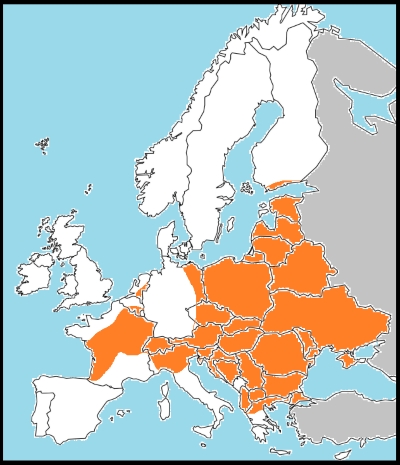 Approximate distribution
Note that within this area it is often very local, in isolated, scattered colonies

This is a wetland butterfly with a wide distribution in central and eastern Europe but generally scarce and difficult to find, due to a combination of the increasing destruction of wetland habitats and the low density of the butterfly at its sites. I saw my first individual in Hungary in 1994. After that, I saw no more until Tim Cowles took me to some sites near Lyon, where I saw my only French large coppers. Since then, I have found large coppers yearly at various sites in western Switzerland, all near Geneva, where the species is apparently expanding its range. One of these sites is very much a dry site - a dry horse paddock to be precise - though it borders a stream. The eggs and caterpillar illustrated above were found far from water in this paddock. They were laid by the spring brood of the butterfly, however, and it is possible the summer brood lays closer to the water - habitat requirements of hibernating larvae may be different from those of summer caterpillars.

From the upperside the males of this species look like scarce coppers but the underside is quite distinctive, differentiating this species from all others. The females are unmistakeable from above or below. I don't know if it is just because of the special status the large copper holds in British butterfly lore and imagination, but it always seems to me this is a particularly magnificent insect. It is a great privilege to find oneself in its company.


Males in particular are fond of nectaring on yellow, daisy-type flowers, though they come to many other nectar sources too. They defend territories in more or less overgrown corners of habitat, frequently returning to the same spots if disturbed, though also capable of zooming off, never to be seen again! Females may be seen wandering more widely, looking for places to lay. I discreetly followed one female while she meandered all over a large, hilly meadow, occasionally stopping to lay when she found dock. I tend to see males in precisely the same places each year, while encountering females rather more randomly in the general area I know them to fly.

The butterfly has a sad history in England, having been discovered in the East Anglian wetlands in the middle of the 18th century only to be driven to extinction by collectors by the middle of the 19th century. The British race was even larger and brighter than the continental race, though a similar race flies in Holland - it was this race that was reintroduced to East Anglia (Woodwalton Fen, Hunts). The reintroduction was successful but the colony was not self-sufficient and the butterfly is (I believe) currently extinct again in England.