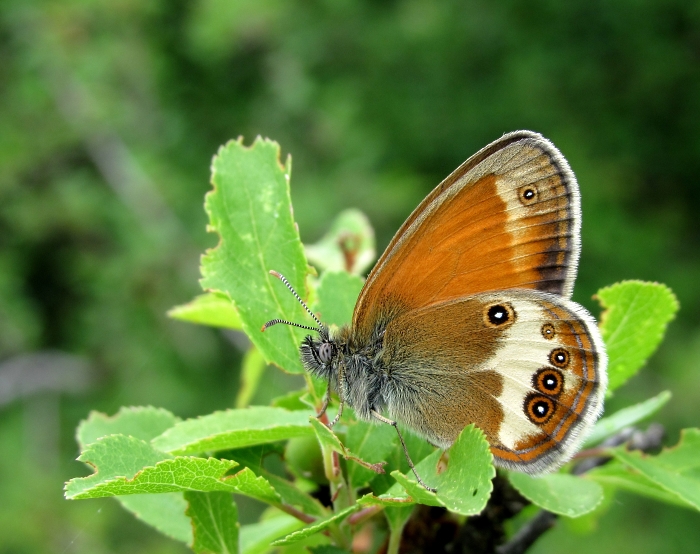 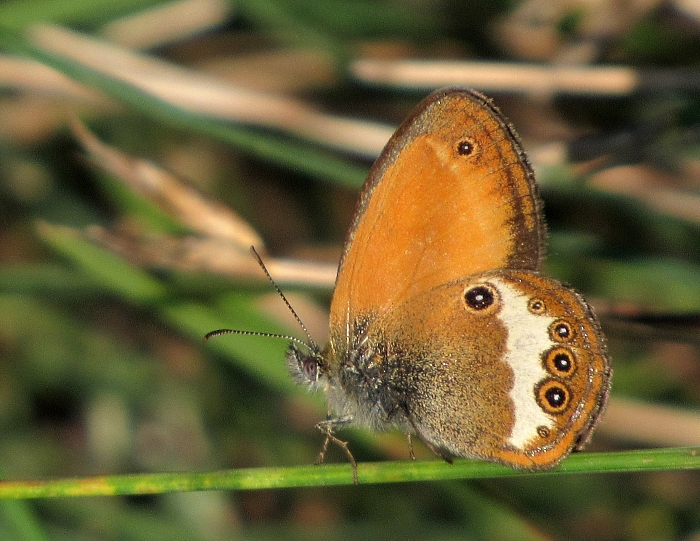 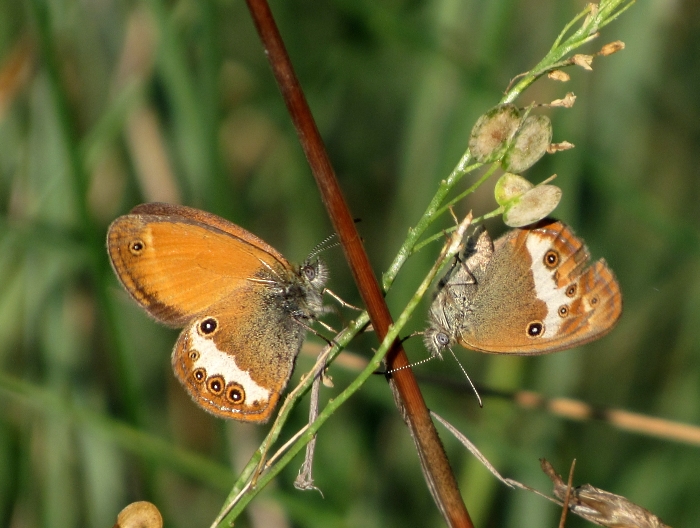 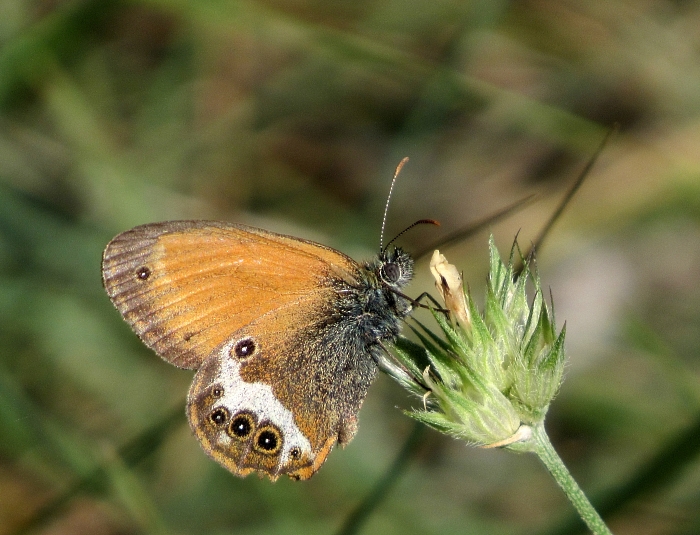 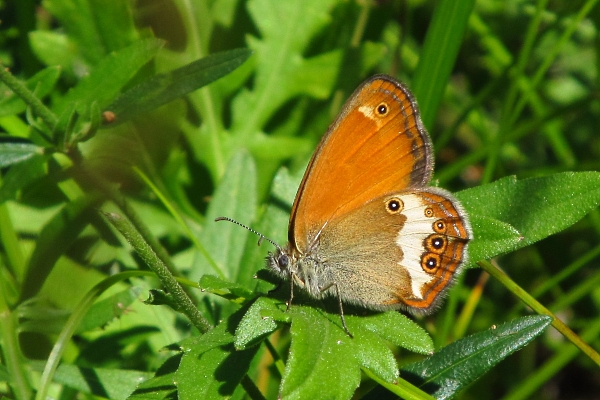 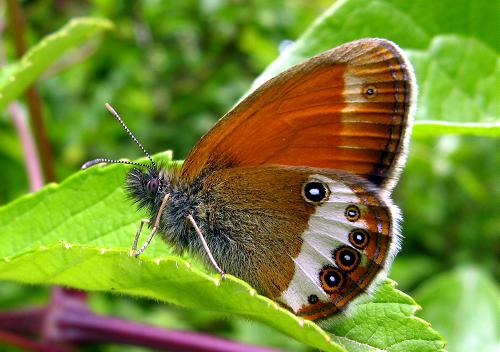 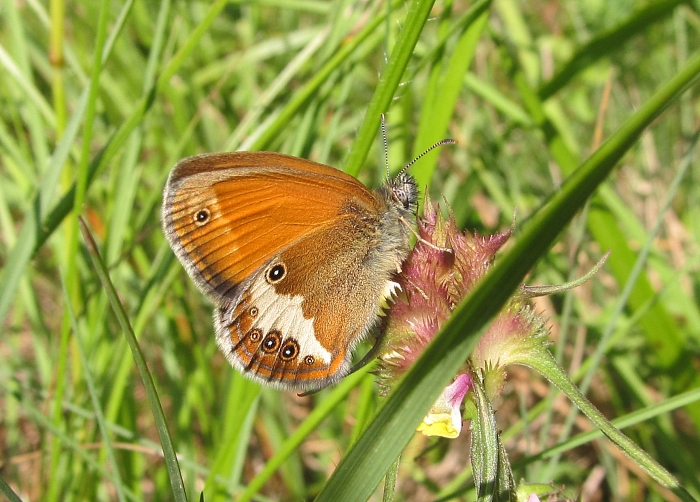 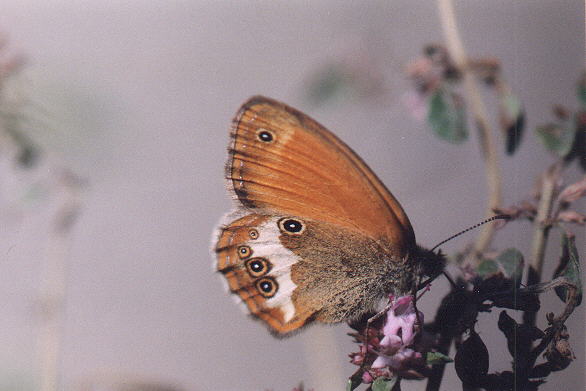 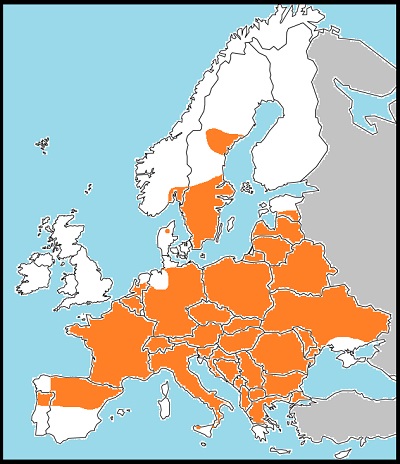 This lovely heath is widespread and often common in much of Europe from Spain to Norway, though absent from substantial areas within this range. In Switzerland, for example, it is absent from the Rhône Valley and most of the plateau, being found principally in Ticino, west of Geneva and the Jura. It is associated with hot, flowery, bushy places with long grass, often near trees or in woodland clearings. In the Pyrenees it is common along flowery tracks with thyme and other herbs, up to about 1600m.

The upperside is never visible at rest but the extensive orange at the base of the forewings can be seen in flight, as can the broad, white band on the underside hindwing. There are four or five ocelli of different sizes outside this band and one - the uppermost - inside it. The ocelli are like targets: white pupils in a black eye with an orange ring outside that and a black ring outside that. The white band extends as far as the cell, differentiating this species from Darwin's heath, should there be any doubt. In Darwin's heath there is brown ground colour between the white band and the cell.

Pearly heath, Darwin's heath and alpine heath form a closely related complex that frequently hybridise where they overlap. The pearly heath is probably the common ancestor. During the last interglacial, it inhabited alpine valleys and crept up into the mountains. When the ice returned it was driven south, but pockets of hardy stock remained, isolated during the last Ice Age - these evolved into alpine heaths. Finally, when the ice retreated, the pearly heaths returned and hybridised with the alpine heaths to produce Darwin's heath. That, at least, is a theory. What is more certain is that this is essentially the low altitude version of alpine heath and Darwin's heath.

Tolman gives the foodplants as common meadow grass, hairy melic and Yorkshire fog. The caterpillars hibernate and the adults fly in a single generation from May to August.