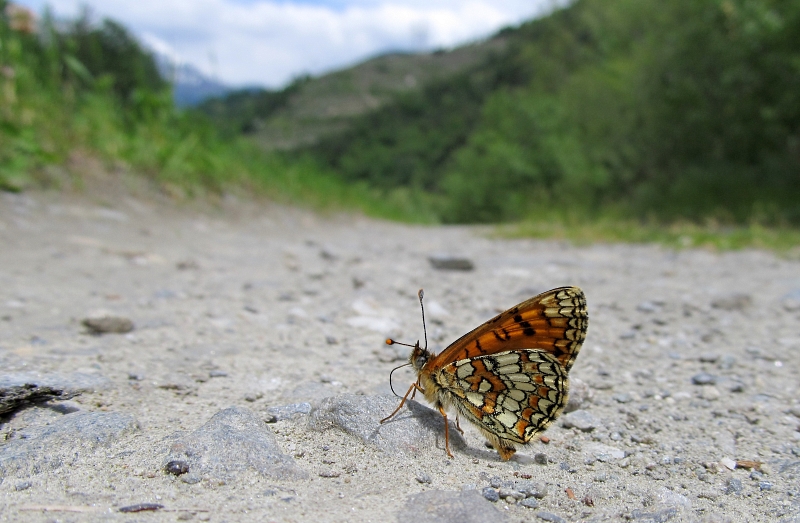 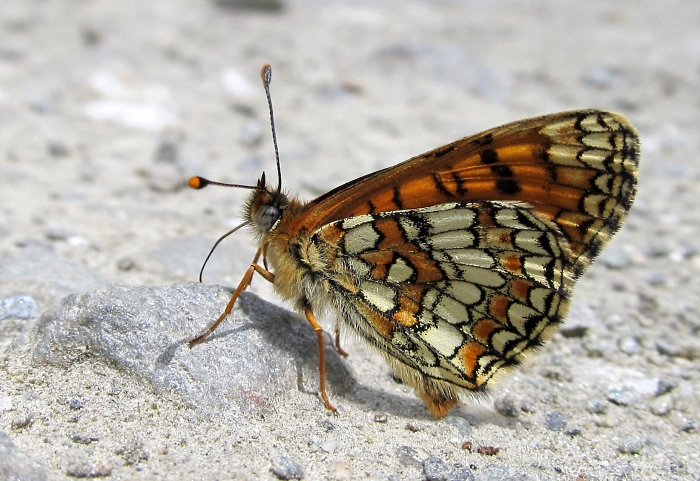 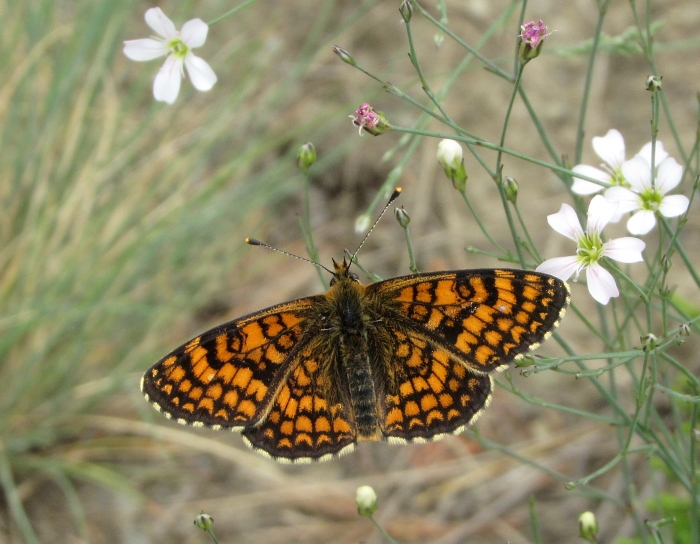 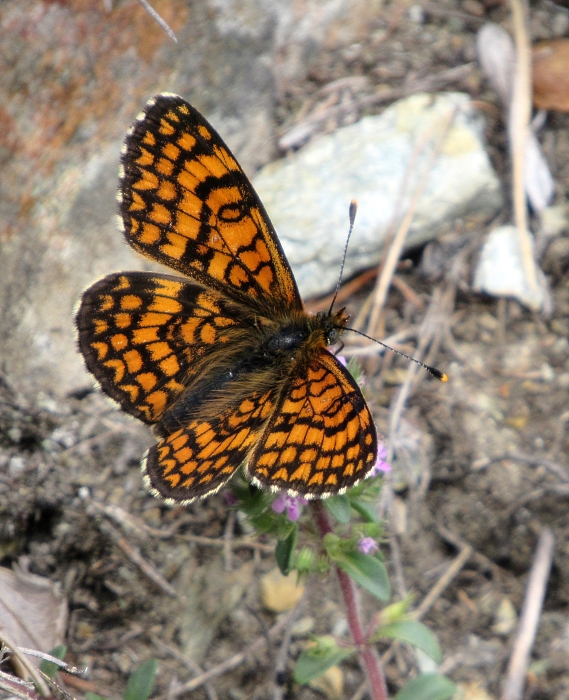 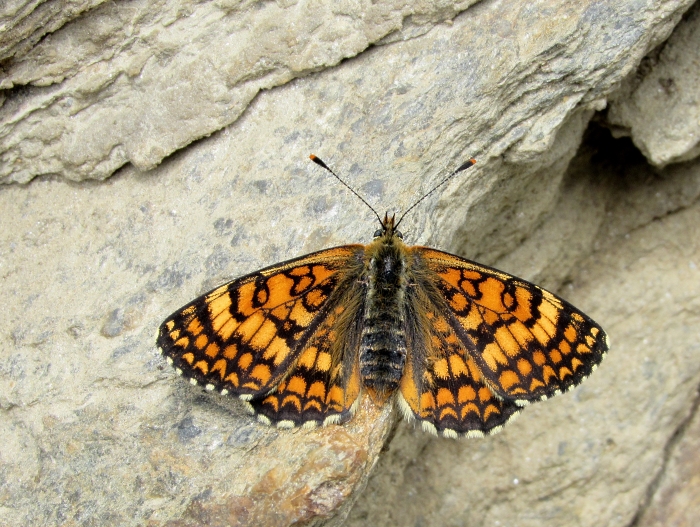 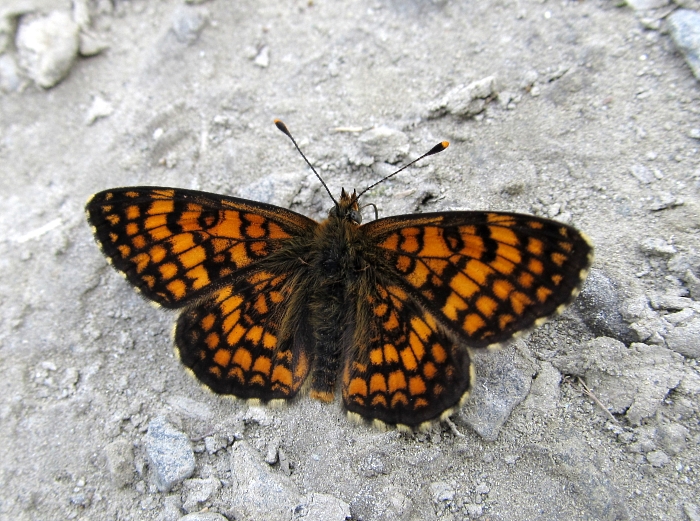 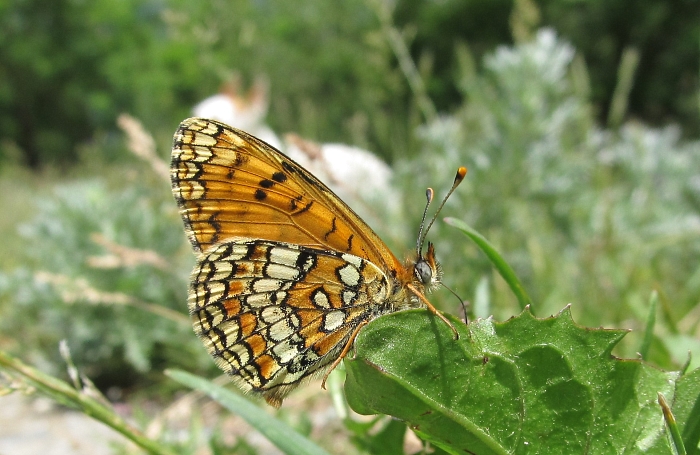 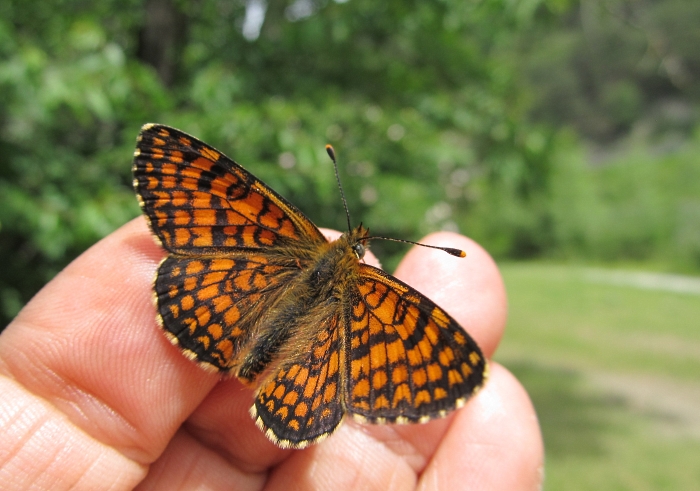 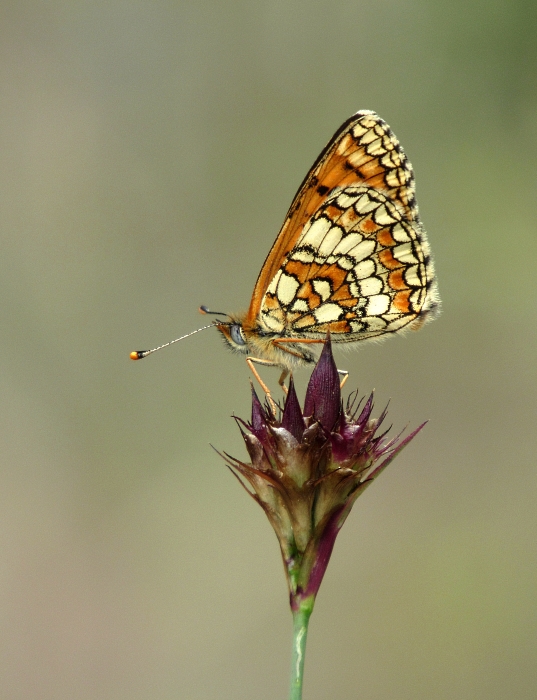 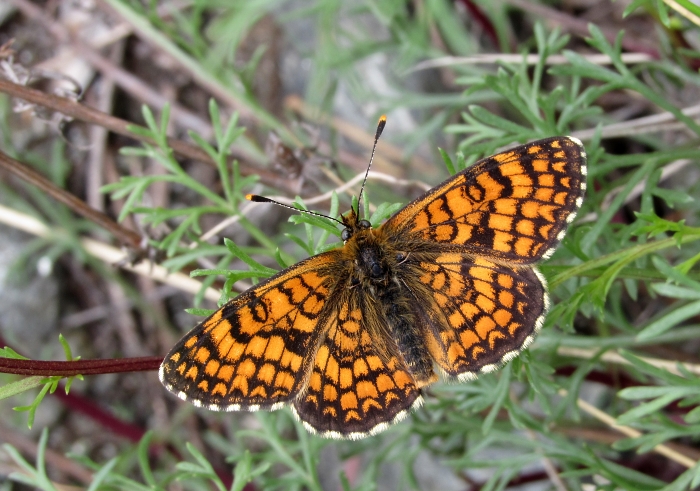 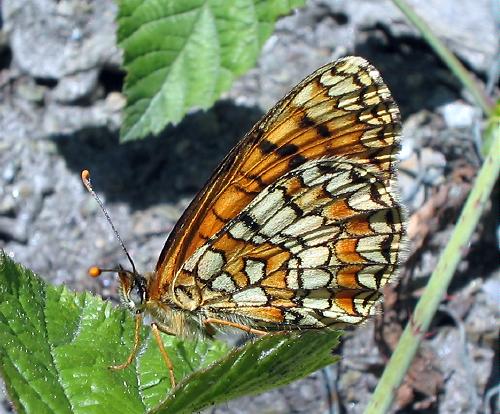 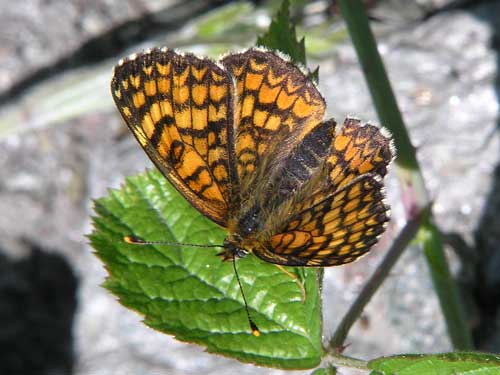 (This picture shows the upperside of the previous insect, which is a female. It was taken by Matt Rowlings - we each had shots at getting upperside and underside but it made a bid for freedom before we were finished! Many thanks to him for letting me use it.) 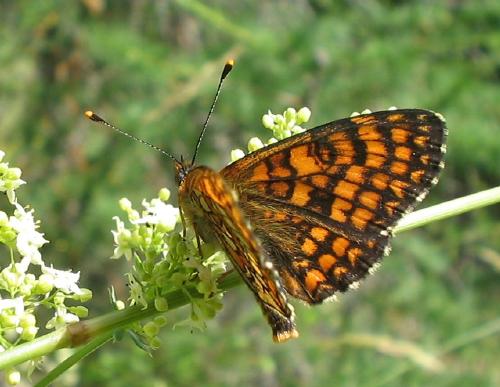 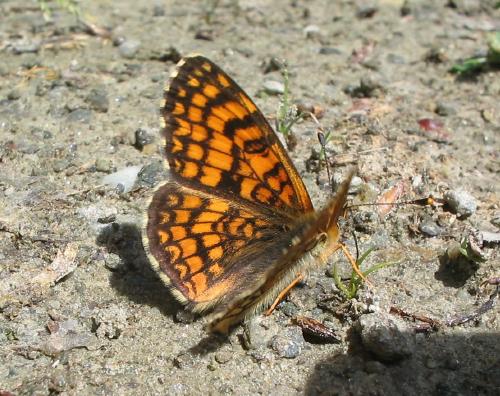 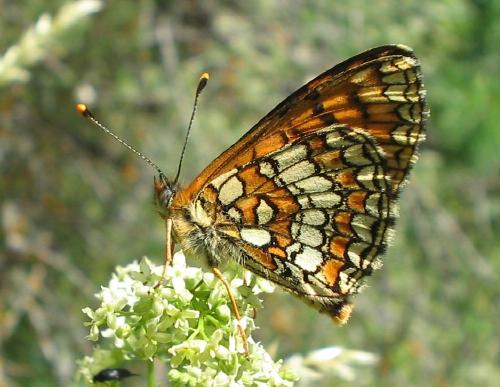 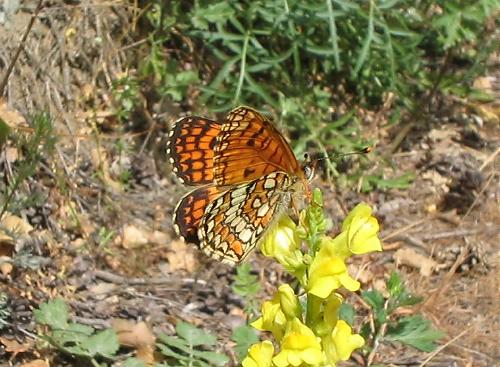 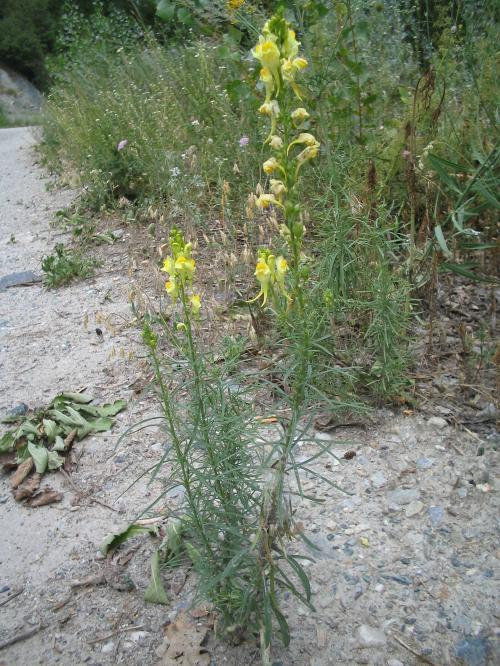 Foodplant with larval web near the bottom 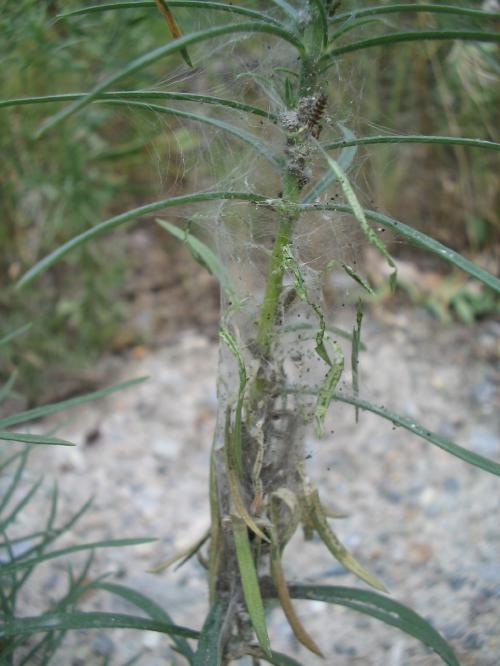 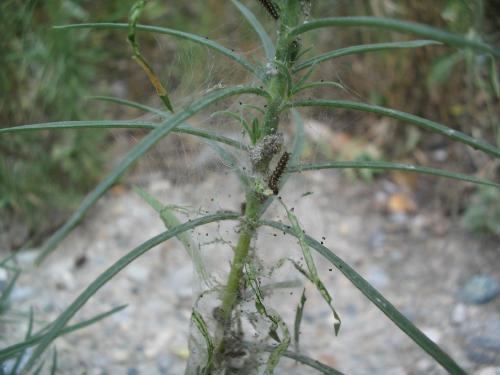 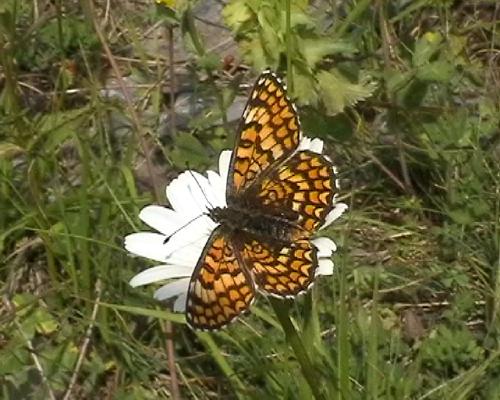 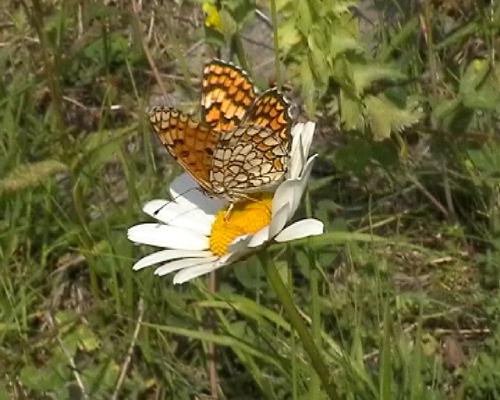 The same individual, showing the underside. 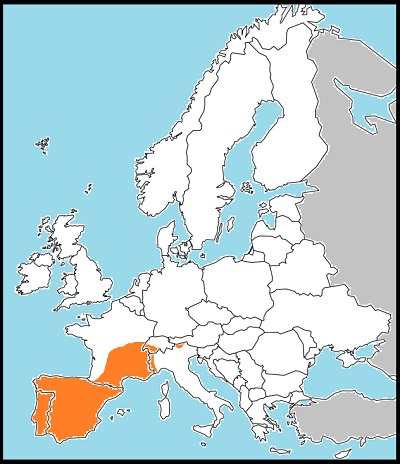 The Provençal fritillary flies in Spain, the southern half of France and rather locally in the Alps, as well as in North Africa. Everywhere, it is more local and generally scarcer than its cousin, the heath fritillary, but where it flies - in hot, flowery places - it may be quite numerous. In the Rhône Valley of Switzerland, the distinctive subspecies berisalii flies (named in error after the little village of Berisal near the Simplon Pass). The nominate subspecies, deione, flies in Spain and the South of France, subspecies rosinae in Portugal and nitida in Morocco and Algeria.

Subspecies berisalii is easy to identify, given a good view. Both males and females show a well defined and more or less symmetrical dumbell in s.1 of the upperside forewing, and on the underside hindwing the inner black marginal line is swollen into lunules in the spaces. These two characters always serve to distinguish between the Provençal fritillary and the heath fritillary. Apart from these, the butterfly has a characteristic appearance, with dark borders above and a rather regular grid of dark markings, that is unmistakable when you are familiar with it. The female is distinctly two-tone, the discal band on the upperside being brighter and paler than those to either side. Other subspecies are less distinctive. Males often but by no means always show the dumbell mark on the upperside forewing and females often lack it. Both sexes are more regular and reticulate than heath fritillaries on the upperside and lack the heavy submarginal branding in ss.2-3 of that species. The palpi are said to be much more orange in Provençal fritillary but I have found this an unreliable feature. Females, like the female in my last photos above (the only nominate Provençal fritillary I have photographed) are strongly two-tone, resembling knapweed fritillaries, though without the distended marginal lunule in s.3 of the forewing.

The principle foodplant is toadflax, though a variety of other hosts are used too. As with many of this genus, the larvae feed and hibernate gregariously, dispersing when mature. The species is bivoltine in most of Europe, flying in May-June and then again in August-September, but single-brooded in the Alps, where it flies from May to July.