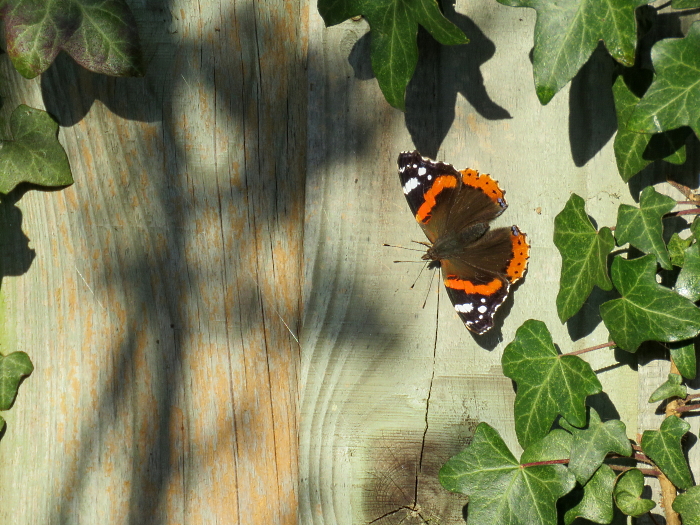 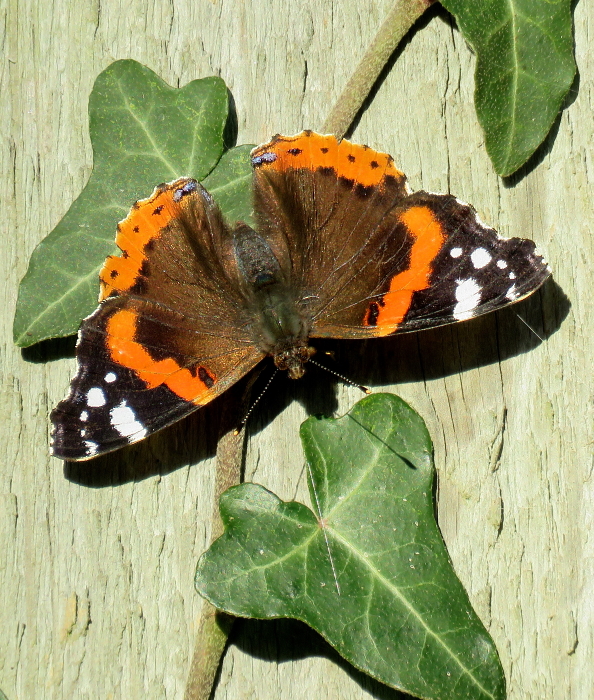 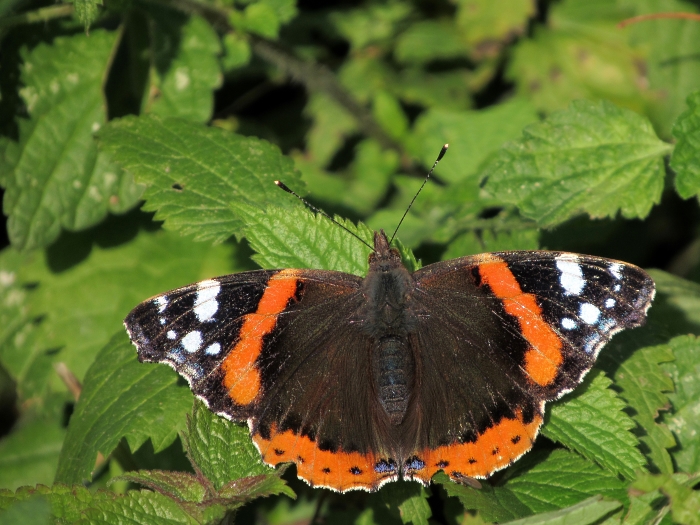 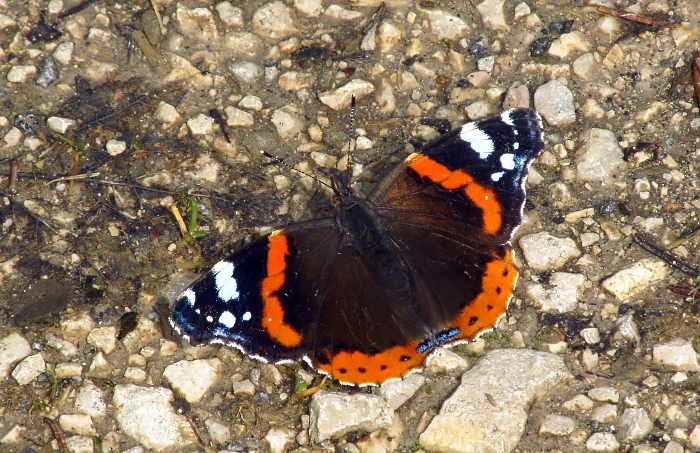 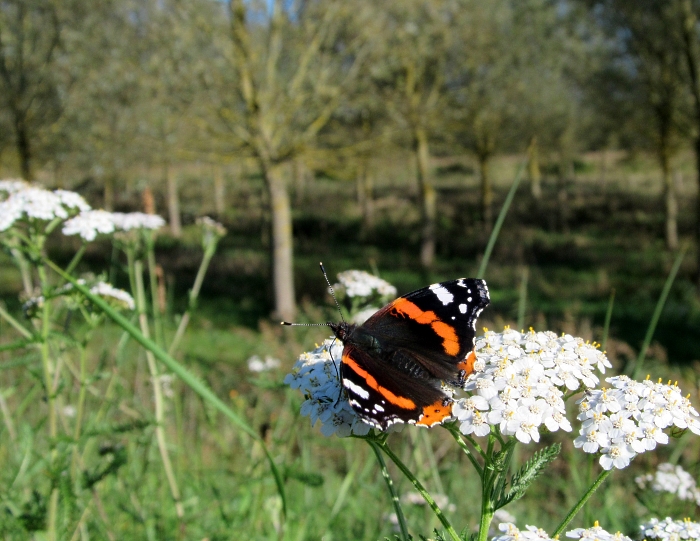 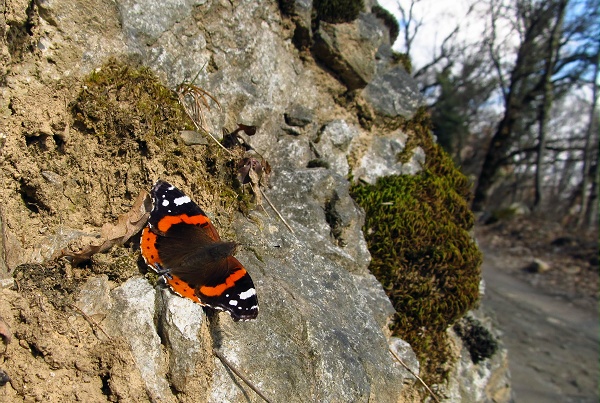 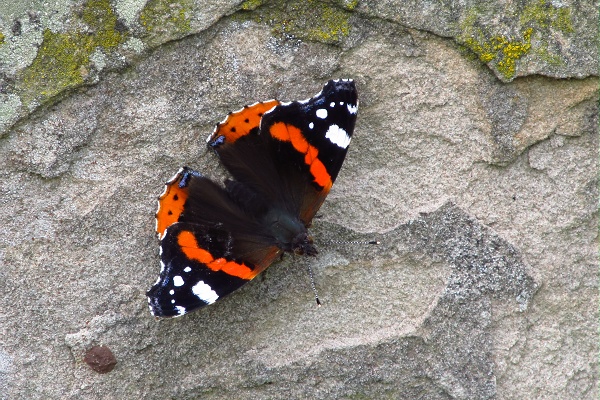 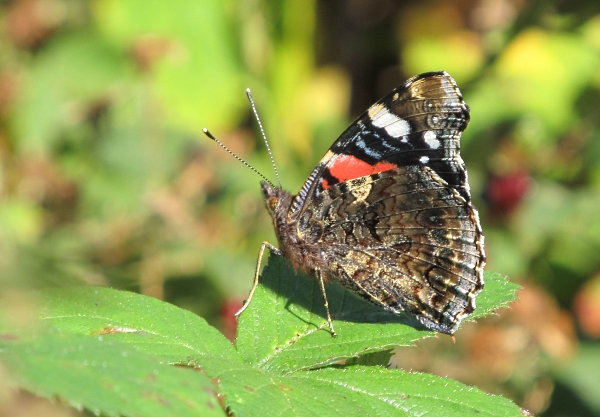 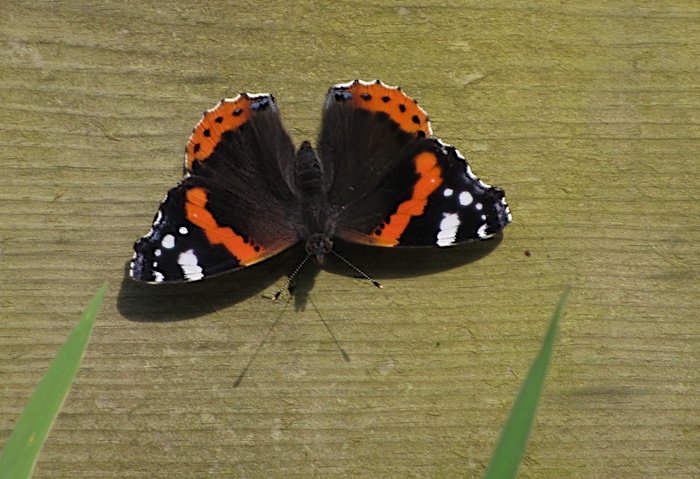 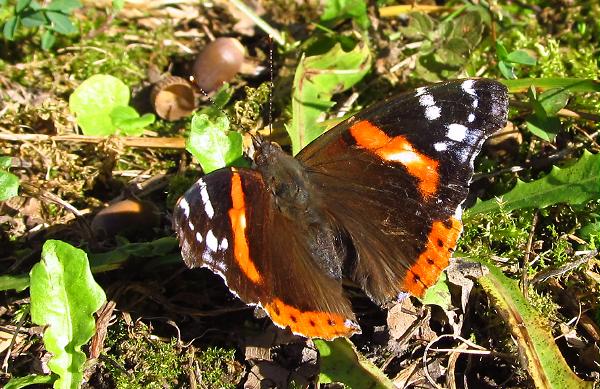 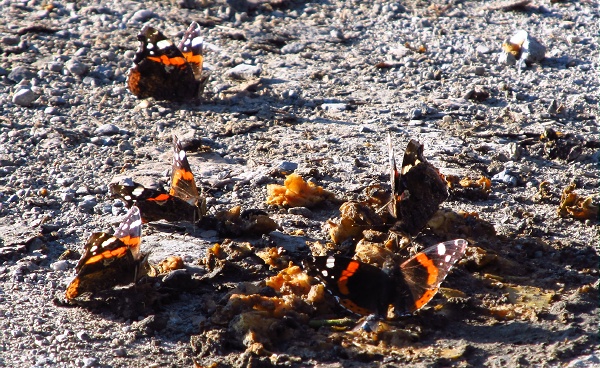 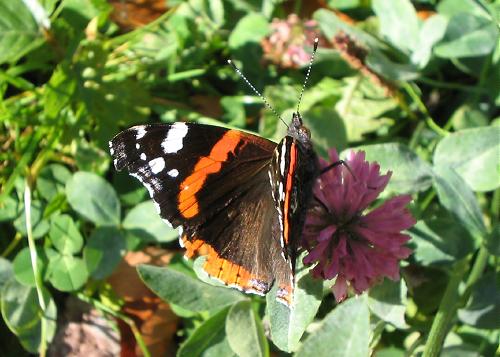 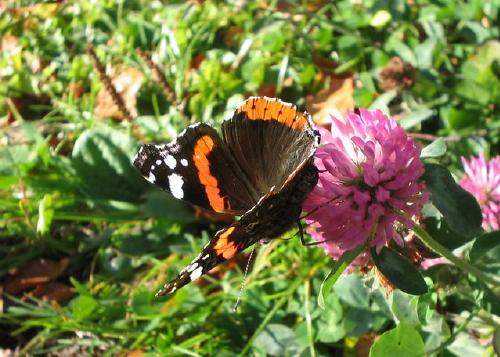 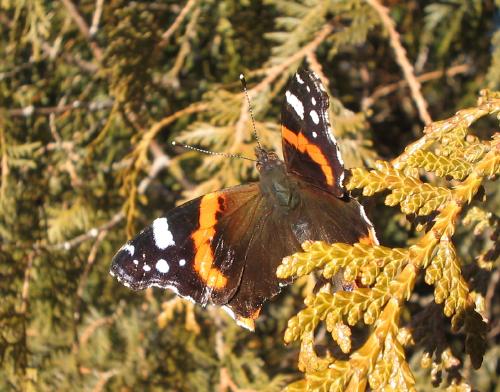 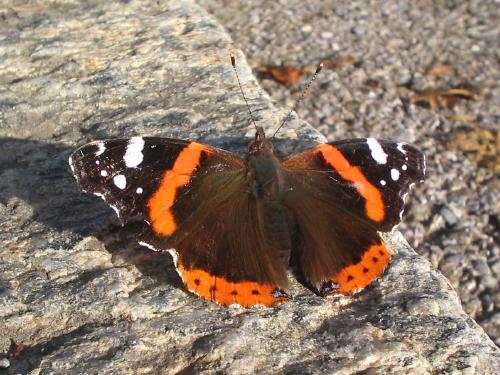 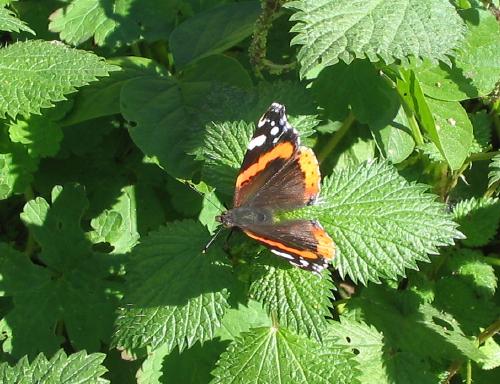 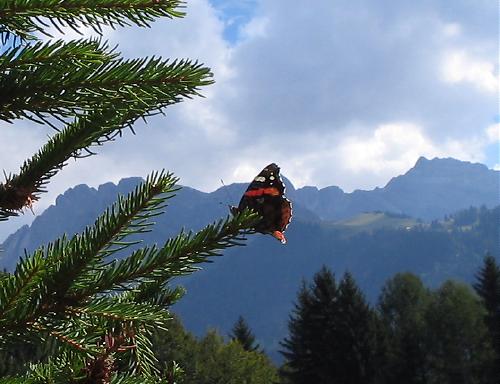 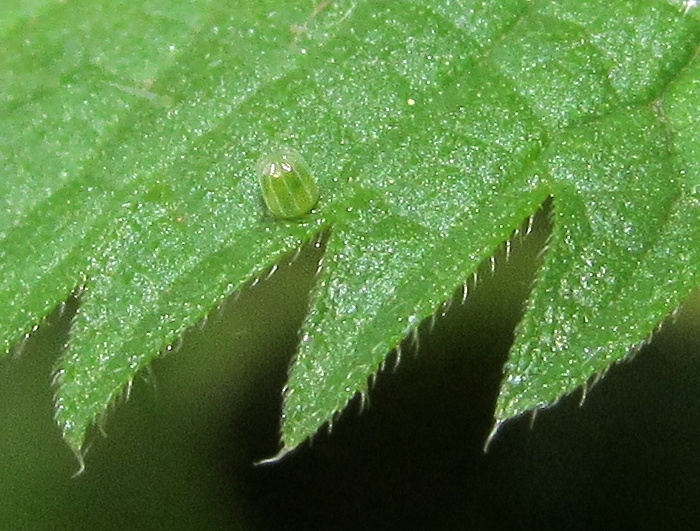 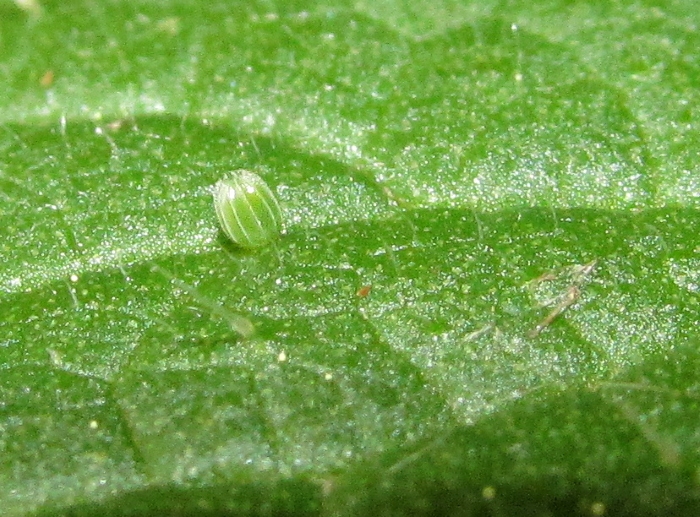 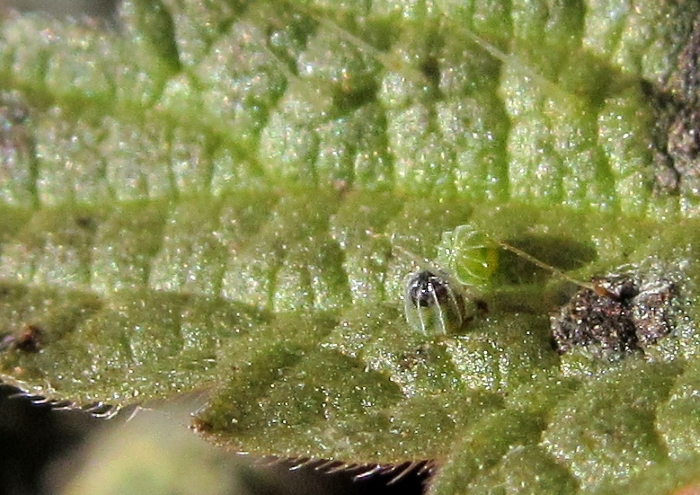 Eggs, Switzerland, December 2016 - the nearer egg is close to hatching 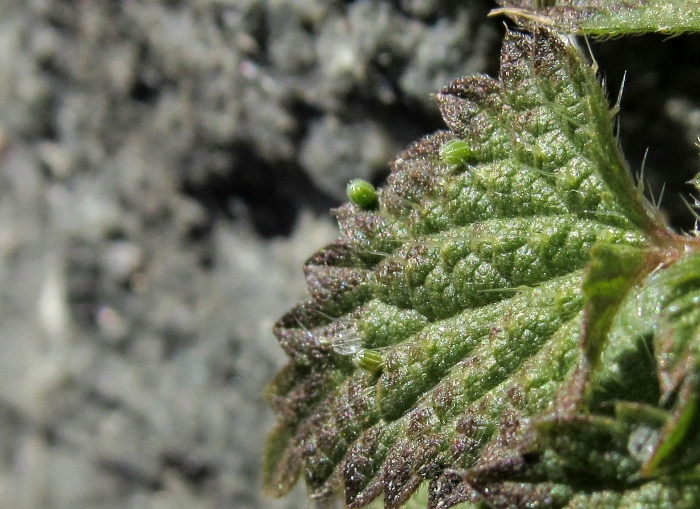 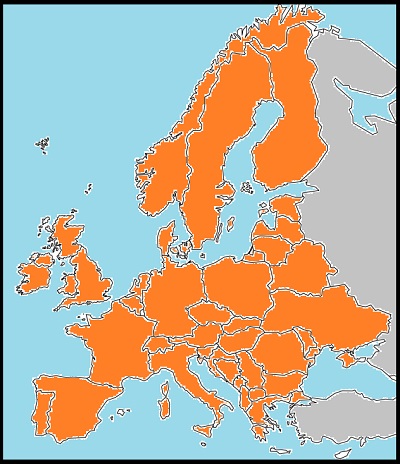 The red admiral is a notable migrant, reaching to all parts of Europe during the summer, even the very far north. Like the painted lady, it breeds continuously wherever it it can, and also like the painted lady engages in large-scale southward movements in the autumn. Its range of permanent residency, however, extends much further north than that of the painted lady and in recent years it has regularly survived the winter in the south of the UK. In Switzerland, marking projects have shown significant autumnal southward migration through mountain cols in but large numbers also remain and try to brave out the cold months. I know one site where mild weather in February is guaranteed to rouse good numbers of red admiral. Nor is it just the adults that survive the winter. Females continue laying eggs into November and December and the resulting caterpillars sometimes make it through. This, then, is a species that stands to gain from a warming climate. It already has the mechanisms in place to take full advantage of milder winters in the north.

The main foodplant is nettle, though pellitory of the wall (Parietaria sp.) is apparently also used. Eggs are laid singly, rather than in batches, on the upper surfaces of leaves, though several may be laid on the same leaf. Larvae live in 'tents' formed by sewing together the edges of leaves, emerging to feed and returning to the tent afterwards. As they grow, they build new tents. Adults go into diapause in winter but this is not a deep, true hibernation, as in the small tortoiseshell or peacock, but rather a state of torpor. This means it is limited in duration and northern winters are typically too long for the butterfly to survive all the way through. I do not know whether insects that have awoken in mid-winter and found nectar (in gardens, for example) are capable of going back into hibernation afterwards but I suspect not.