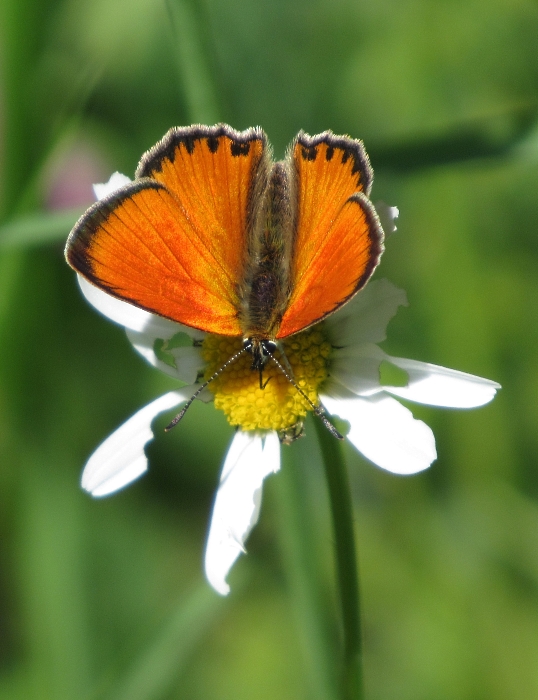 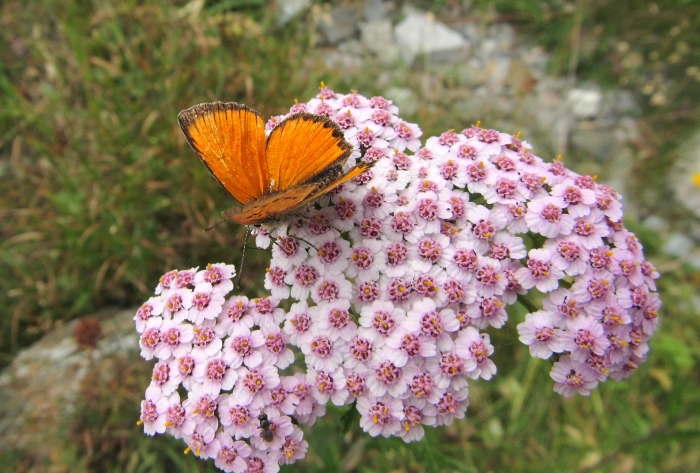 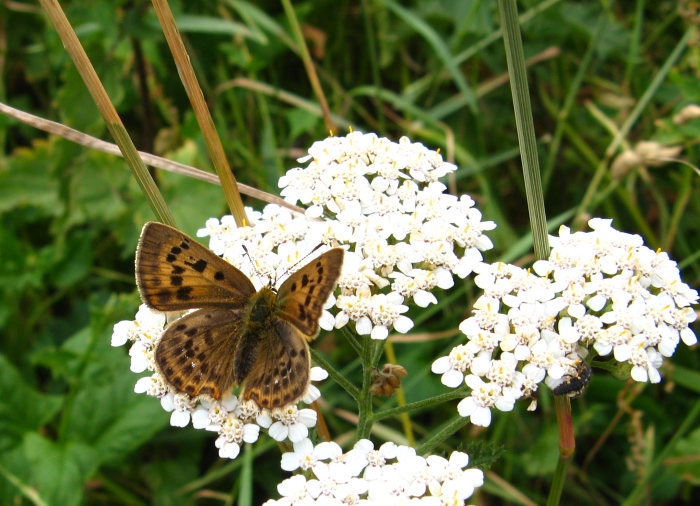 Female, Switzerland, July 2010 (this is the darker form - lighter form females
have less fuscous suffusion and brighter orange on the forewings) 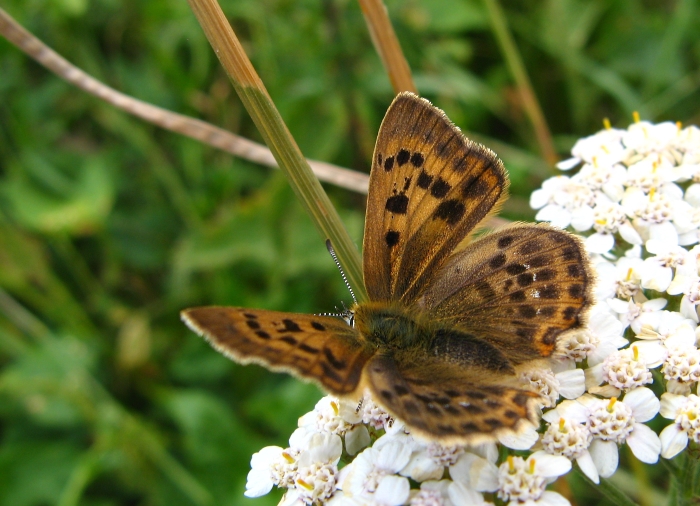 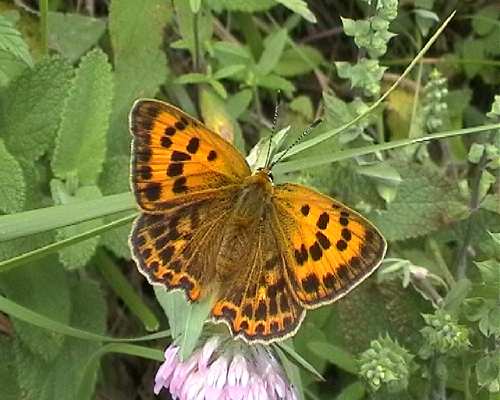 Light form of female, from a video frame, Spain 2004 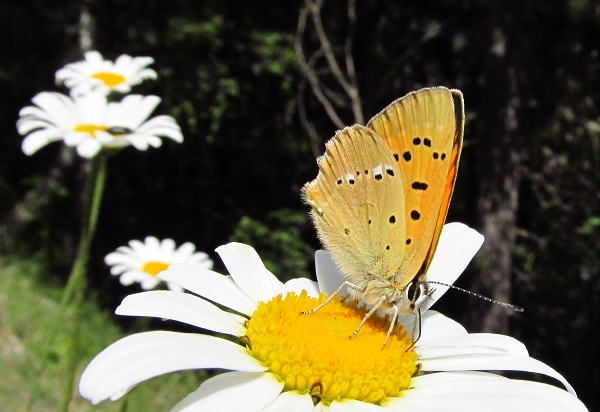 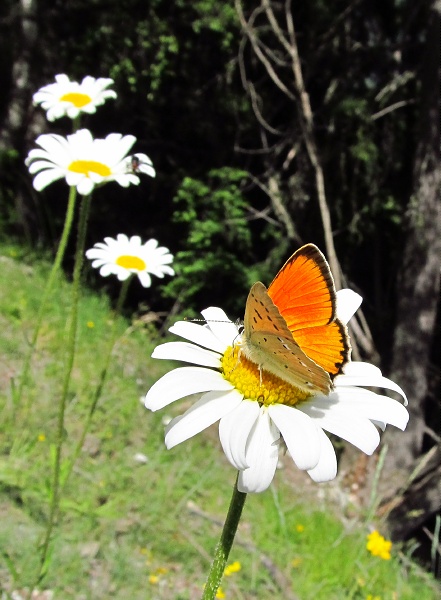 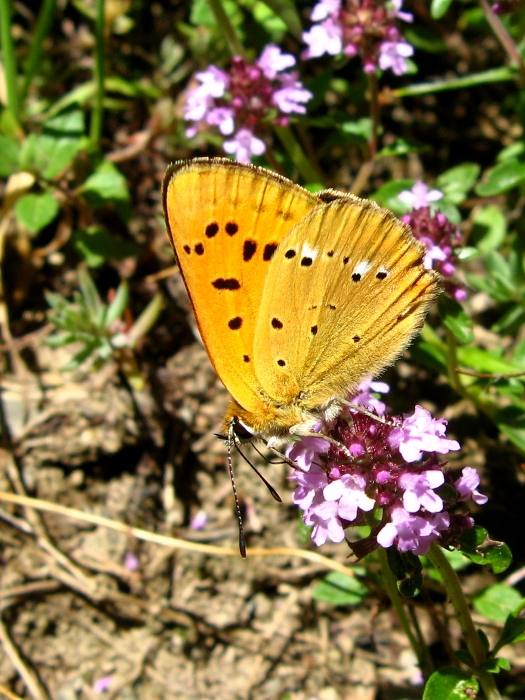 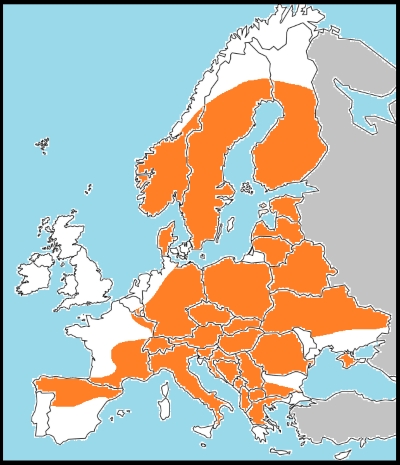 
Despite its English name, this species is actually quite common over much of its range, especially in the mountains. In Switzerland, males in particular are conspicuous companions on any high trip to flowery slopes in June and July. The same is true along flowery tracks in the Pyrenees. The 'scarce' in the name refers specifically to its status in the UK, where it no longer flies and indeed might never have flown - there is much confusion in the historical record.

Both sexes are unmistakable if the underside is seen. The white postdiscal flecks on a spotty but otherwise uniformly dull gold hindwing are unique. From the upperside, the male may be taken for a large or purple-edged copper - the latter especially in the high Alps where ssp. eurydame flies. In truth, there is little chance of confusion with large copper because the habitats are so different, but should it arise, the lack of a discoidal spot on the forewing and the broadly tapered apex to that wing should suffice to distinguish the scarce copper even if an underside view is not available. Where there is overlap with the purple-edged copper, and if no violet reflections can be seen, the best thing is to try and catch a glimpse of the unmistakable underside for confirmation. Females come in two colour schemes, the high alpine form being considerably darker and suffused with fuscous.

Scarce coppers fly from May to September in a single brood. Eggs are laid on Rumex sp., where they either hatch immediately, spending the winter as a small larva, or hibernate, hatching in the spring.